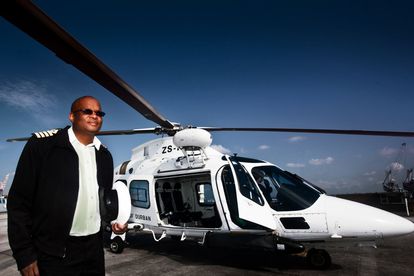 Captain Rufus Lekala remains the master of his own destiny, after becoming one of the first black harbour masters in SA and now graduating from UKZN. Photo: Supplied

Captain Rufus Lekala remains the master of his own destiny, after becoming one of the first black harbour masters in SA and now graduating from UKZN. Photo: Supplied

Captain Rufus Lekala graduated with a postgraduate diploma in Maritime Studies from the University of KwaZulu-Natal on Friday. He basked in the glow of his brighter horizons during one of the university’s virtual graduations.

LEKALA THE MASTER OF HIS OWN DESTINY

Lekala was born in a small village called Kutupu in Limpopo and is married with three children.

Before he became the head of the Maritime Service for the Transnet National Port Authority, he began his career in 1995 after working as a taxi driver. He used to drive the streets of Mamelodi, Pretoria for five years.

Lekala’s voyage in the maritime sector started at what was known as the Cape Technikon when he secured a bursary to pursue his studies.

He used the bursary, from Transnet, to study for a diploma in Maritime Studies.

Lekala frankly says before it became his passion, he only studied as he saw it as an opportunity to save his family from a life of hardships.

“There was nothing that inspired me to join the sector. I was in desperate need of a career that would take my family and me out of poverty. Fortunately, the maritime sector presented itself as a home that I will never trade for anything,”

Since coming aboard, his hard work in the maritime industry started out at Transnet as Tug Master in the Port of Cape Town, and he went on to serve as a marine pilot in the Port of Saldanha Bay.

Lekala was also the first black Harbour Master in the Port of East London in 2002 and later in Cape Town and Durban.

Now he is the chief harbour master of the Transnet National Port Authority since June 2011.

FROM CONDUCTING PASSENGERS TO FREIGHT VESSELS AND HARBOURS

Lekala says he feels a great deal of pride in himself, but more importantly, he is grateful for the support and encouragement of his family.

Now he is back to his duties as chief harbour master where Lekala is entrusted with the vital responsibility of overseeing the planning and execution of port marine operations.

The responsibilities included designating where vessels should lie within the harbour, vessel traffic management services, provision of pilotage services, conservancy and other marine-related operations.

Lekala is still pursuing his academic aspirations as he is currently reading for a Master of Commerce in Maritime Studies through UKZN.

His study focuses on the impact of changing container vessel sizes on ports and he is exploring the cascading effects from the perspective of the South African complementary container ports system in Durban, Ngqura and Cape Town.