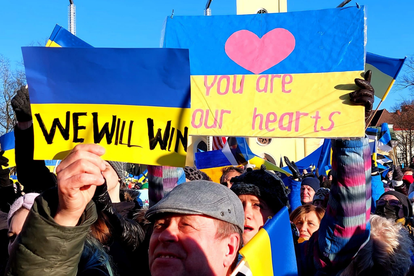 Ukraine has called upon the US to provide fighter jets in the conflict against Russia. Image: Ukrainian President/ Twitter

Ukraine has called upon the US to provide fighter jets in the conflict against Russia. Image: Ukrainian President/ Twitter

Ukrainian President Volodymyr Kelensky has urged NATO to declare the airspace over his nation a no-fly zone. During a recent call with United States lawmakers, Volodymyr urged both the US and NATO to at least send Ukraine fighter jets to aid in the conflict with Russia.

US officials are currently in talks with Poland to discuss a deal which would ultimately assist Ukraine with additional fighter jets.

Numerous reports indicate that the Ukrainian President encouraged the US and other member nations of NATO to assist with warplanes to help the country defend itself. Currently, Ukraine is facing a full-scale Russian assault that has seen cities in the region pelted with missiles.

Four US officials told Politico that the country is considering a deal which would involve the US sending fighter jets to Poland. This is on the condition that Poland, in turn, provides Ukraine with used MiG-29s which are Soviet-era aircraft.

A Wall Street Journal report says that officials confirmed this deal would require both the White House and Congress to take action. This agreement will involve the US sending Poland F-16s.

The Insider requested comment from the White House on this rumoured deal and received the following response:

“We are working with the Poles on this issue and consulting with the rest of our NATO allies. We are also working on the capabilities we could provide to backfill Poland if it decided to transfer planes to Ukraine.”

Zelensky calls on US to aid Ukraine

This deal was sparked with a Zoom call over the past weekend, during which Zelensky called on hundreds of members of Congress.

In response to the Ukrainian President’s call for assistance, Sen. Ben Sasse of Nebraska issued a statement.

“Zelensky’s message is simple: ‘close the skies or give us planes. Let’s be clear-eyed about our options: A No-Fly Zone means sending American pilots into combat against Russian jets and air defences — in a battle between nuclear powers that could spiral out of control quickly. But Americans should absolutely send Ukrainians planes, helicopters, and UAVs.”