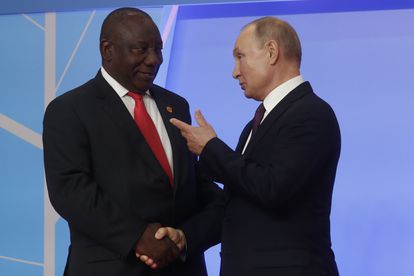 Russian President Vladimir Putin greets South African President Cyril Ramaphosa during the official welcoming ceremony for the heads of state and government of states participating in the 2019 Russia-Africa Summit in Sochi on 23 October 2019. Photo: AFP/Sergei CHIRIKOV

Russian President Vladimir Putin greets South African President Cyril Ramaphosa during the official welcoming ceremony for the heads of state and government of states participating in the 2019 Russia-Africa Summit in Sochi on 23 October 2019. Photo: AFP/Sergei CHIRIKOV

South Africa has once again opted against voting in a United Nations resolution aimed against Russia. This time, the United Nations’ General Assembly voted to have Russia removed from the UN Human Rights Council (UNHRC).

It has been more than a month since Russian President Vladimir Putin launched an offensive on neighbouring Ukraine, sending hundreds of thousands of troops to attack key structures. The situation has evolved into a humanitarian crisis as more than 3.5 million people were forced to flee their homes for neighbouring countries. There is now more outrage as shocking images have been doing the rounds on social media, showing the bodies of Ukrainian civilians believed to have been killed by Russian troops, in and around the capital Kyiv.

YOU CAN ALSO READ: ‘Shame on you’: SA gov SLAMMED for not voting against Russia

South Africa was one of 58 member states which abstained from the latest vote, held on Thursday, 7 April 2022 – 93 countries voted in favour of suspending Russia from the UNHRC, while 24 were against. There are 193 member states in the UN General Assembly.

Other nations which did not vote include India, Bangladesh, Bhutan, Egypt, Sri Lanka, Iran, Maldives, Singapore and Saudi Arabia.

South Africa’s Deputy Ambassador to the UN, Xolisa Mabhongo has called for dialogue in the Ukraine-Russia conflict.

“South Africa is of the firm belief that the tabling of the resolution that we will consider today [Thursday] is premature and pre-judges the decision of the commission of Inquiry,” Mabhongo is quoted as having said.

In March, SA also decided to sit out a UN General Assembly vote meant to reprimand Russia for its invasion of Ukraine. The government’s stance on the situation has been quite controversial. President Cyril Ramaphosa recently reiterated his call for international bodies to focus on measures that would bring both Russia and Ukraine together, as opposed to condemning the Kremlin.

“The war in the Ukraine has had an extraordinary impact on global affairs, and these developments will continue to define international relations into the future. As a country we are committed to the articles of the United Nations Charter. including the principle that all member states shall settle and should settle their disputes by peaceful means,” said Ramaphosa when he addressed the South African Heads of Mission Conference on Thursday – the same day of the recent vote.

YOU CAN ALSO READ: Ukraine latest: Vladimir Putin’s daughters to face US sanctions