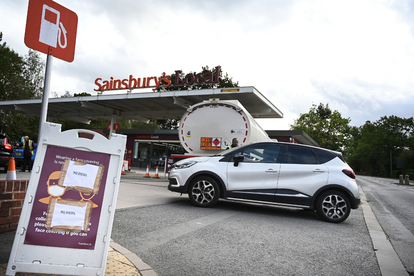 A sign reads “No diesel” car arrives behind a fuel tanker, replenishing stocks at a petrol station in Coventry, central England on September 28, 2021. The UK government today faced calls for nurses, police, teachers and other key workers to be given priority at petrol pumps, as the army was put on standby to ease a fuel supply crisis.
Paul ELLIS / AFP

A sign reads “No diesel” car arrives behind a fuel tanker, replenishing stocks at a petrol station in Coventry, central England on September 28, 2021. The UK government today faced calls for nurses, police, teachers and other key workers to be given priority at petrol pumps, as the army was put on standby to ease a fuel supply crisis.
Paul ELLIS / AFP

The UK government on Tuesday faced calls for nurses, police, teachers and other key workers to be given priority at petrol pumps, as the army was put on standby to ease a fuel supply crisis.

Filling stations across the country have seen long, snaking queues of frustrated and angry motorists concerned that a shortage of tanker drivers could lead to pumps running dry.

But four days of panic-buying, even as the government insisted there was no shortage of fuel stocks, has left some frontline public sector workers unable to get to work.

Transport Secretary Grant Shapps said there were “tentative signs of stabilisation”, as filling stations were restocked, although that has not yet shortened queues.

But he blamed the public for panic-buying and the pandemic, which prevented 30,000 heavy goods vehicle drivers being tested, for the issue.

“Once we all return to our normal buying habits… the quicker we can get back to normality,” he told Sky News.

The British Medical Association and the Royal College of Nursing, however, said “urgent action” was still required, as healthcare staff were increasingly unable to travel.

“We can’t be waiting in queues for two or three hours for petrol or diesel when we have patients to see,” BMA deputy chairman David Wrigley told Times Radio.

Paramedic Jennifer Ward, 21, said she had to try five different garages in Norfolk, eastern England, before she could fill up her ambulance.

“We work a stressful job and we don’t need any added anxiety,” she told the Daily Mail.

The government maintains that a lack of tanker drivers to deliver fuel and unprecedented demand is behind the crisis, and the situation was likely to ease in the coming days.

Despite repeated denials throughout the day, Prime Minister Boris Johnson late Monday announced that troops had been put on alert to deploy if required.

Even The Sun newspaper, normally supportive of Johnson, said the mixed messaging was undermining public confidence, and accused the government of being “asleep at the wheel”.

“Is anyone actually in charge in Downing Street?” it asked in an editorial.

“Get a grip on it, PM. Public patience is close to breaking point.”

Fuel shortages at filling stations are now having a knock-on effect across several sectors.

Dozens of non-league football matches were called off because players and officials have been unable to travel, and some schools said online lessons could return.

The head of the NASUWT teaching union, Patrick Roach, said public transport was “simply not an option” for many teachers, as their schools could only be reached by car.

David Brown, chair of the National Courier and Despatch Association, told AFP his drivers were unable to commit to some longer journeys as they were “struggling to find fuel”.

Britain was contending with a shortage of truckers even before the shortfalls in tanker drivers began to bite, with the resulting empty supermarket shelves and delivery delays stoking fears of a lack of food and toys for Christmas.

The British Meat Processors Association has said fears the panic-buying of fuel could make existing supply chain problems to supermarkets worse and cause further shortages.

The government insists Europe is facing the same problem and has eased its post-Brexit immigration rules for three months in the hope of enticing foreign truckers back.

But critics say that is unlikely to help, blaming the country’s departure from the EU that took full effect in January, combined with the pandemic, and a failure to replace the thousands of overseas drivers who left.

The main opposition Labour party’s home affairs spokesman, Nick Thomas-Symonds, accused the government of “utter incompetence” and blamed it on its “handling of Brexit”.

“The blame lies squarely with them, it lies with no-one else,” he added.

ALSO READ: Julius Malema says SA should put the UK on a red list ‘for colonialism’