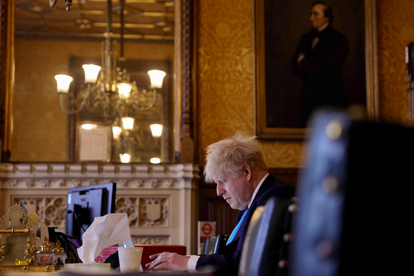 Oliver Dowden on Monday urged the England and Wales Cricket Board (ECB) to “think again” over the sanction for the 27-year-old.

Robinson — who impressed with ball and bat in his debut Test against New Zealand, which finished in a draw on Sunday — has been suspended from all international cricket pending the outcome of an investigation following tweets he posted in 2012 and 2013.

“Ollie Robinson’s tweets were offensive and wrong,” Dowden said. “They are also a decade old and written by a teenager.

“The teenager is now a man and has rightly apologised. The ECB has gone over the top by suspending him and should think again.”

“As Oliver Dowden set out, these were comments made more than a decade ago written by someone as a teenager and for which they’ve rightly apologised,” said a spokesman for the prime minister.

‘EMBARRASSED AND ASHAMED’ BY POSTS

The paceman led England’s attack with 4-75 in the first innings of the first Test at Lord’s and followed up with 3-26 in the second innings while also making a useful 42 with the bat.

Robinson, in a statement issued after play on Wednesday, said he was “embarrassed” and “ashamed” by the posts. The posts had emerged on the first day of his Test debut.

“I want to make it clear that I’m not racist and I’m not sexist,” he added.

“The ECB should say ‘let’s learn from this’ and make him do the equivalent of community service,” Gower told the BBC on Monday.

“He should go out there among county cricketers and spread the word that social media shouldn’t be abused.”