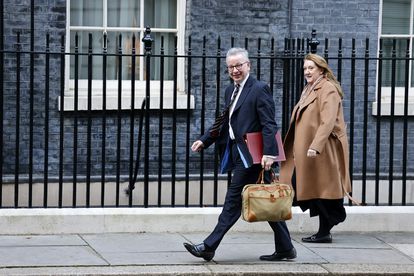 Britain’s Housing Secretary Michael Gove (L) arrives at 10 Downing Street in central London on 5 January, 2022. – British hospitals have switched to a “war footing” due to staff shortages caused by a wave of Omicron infections, the government said Tuesday, as the country’s daily Covid caseload breached 200,000 for the first time. Photo: Tolga Akmen / AFP

Britain’s Housing Secretary Michael Gove (L) arrives at 10 Downing Street in central London on 5 January, 2022. – British hospitals have switched to a “war footing” due to staff shortages caused by a wave of Omicron infections, the government said Tuesday, as the country’s daily Covid caseload breached 200,000 for the first time. Photo: Tolga Akmen / AFP

Housing Secretary The UK government has told property developers to contribute more to remove combustible cladding from residential buildings, under revised plans to be unveiled Monday following the deadly 2017 Grenfell Tower fire.wants the industry to stump up an estimated £4 billion ($5.4 billion, 4.8 billion euros) to cover the expense of removing the dangerous cladding from buildings 11 to 18 metres tall with flats.

It marks a U-turn on heavily criticised plans announced early last year which would have required flat owners with unsafe material on their properties to access a low-interest loan scheme to help pay the removal costs.

The government would also have contributed billions.

The new proposals come after more than four years of inaction and wrangling with the property industry following the June 2017 high-rise blaze in west London that killed 72 people.

An official report has blamed highly combustible cladding fixed to the 24-storey block as the “principal reason” the fire spread, while a public inquiry into the tragedy remains ongoing.

Grenfell was Britain’s deadliest domestic fire since World War II and has left thousands of leaseholder owners of flats in other buildings stuck in perilous situations, unable to afford the removal of the cladding.

They have also faced other rising costs, from increased insurance premiums to, in some cases, having to pay for around-the-clock fire marshal patrols.

Meanwhile most have been unable to sell or rent their flats because mortgage providers are unwilling to lend on the properties or because of other resulting restrictions.

In a letter to the industry revealed Monday, Gove demanded developers and other firms involved provide a “fully-funded plan of action” to fix their situations by “early March”.

The minister, who took over the housing brief last September, warned he was “prepared to take all steps necessary” to fix the “broken system”.

“We now need to make sure that everyone in the development and in the construction product manufacturing sector who has a responsibility steps up to the plate,” Gove told BBC radio ahead of unveiling the plans in parliament.

He added the government was being guided by three principles.

“Firstly, leaseholder shouldn’t pay, secondly the polluter should pay in the broadest sense, and thirdly we want to work with everyone involved in order to get to a constructive solution.”

Gove noted companies involved could be stopped from getting future government and other contracts if they refuse to comply.

He cited the case of Irish company Kingspan, whose products were used in Grenfell Tower and last month saw a sponsorship deal with Formula One team Mercedes axed over its links to the disaster.

The tie-up had caused uproar among Grenfell support groups with Mercedes’ star driver Lewis Hamilton even being drawn into the controversy.

“He appreciated, not least because of Lewis Hamilton’s own sympathy with the Grenfell United community, and so that contract ended.”