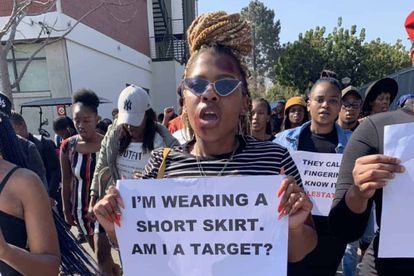 The University of Cape Town (UCT) suspended academic activities on Wednesday to mourn student Uyinene Mrwetyana who was brutally raped and killed allegedly by a post office employee.

UCT students held a night vigil on Tuesday on the back of a trending #AmINext denouncing the widespread gender-based violence across the country.

Vice-Chancellor of UCT, Mamokgethi Phakeng, said it was even more distressing that Mrwetyana’s murder was one of many where women and girls are ripped from communities in a violent manner.

“It is important that as a community we recognise this moment for what it is. A devastating incident of gender-based violence which is utterly unacceptable, shocking, criminal and should never, ever occur in our community or in our society,” Phakeng said.

Programme of protest and memorial for Uyinene Mrwetyana

The programme for the day started with a picket by students outside the Parliamentary precinct. A memorial service will be held at noon at the university campus.

The 19-year-old film and media student had gone to a post office in Claremont to collect a parcel and was never seen again.

The discovery of her body in Khayelitsha drew widespread outcry and condemnation, with social media users calling for a state of emergency against gender-based violence.

Man arrested and charged after confession

Police this week said a 42-year-old man employed at the post office was arrested and charged with murder after he confessed to killing the student.

He appeared in court on Tuesday. National Prosecuting Authority spokesman in the Western Cape, Eric Ntabazalila, said the man attacked Mrwetyana after she returned to the post office on his advice.

“She tried to fight back…he took her and put her in a vehicle and drove to an area in Khayelitsha, that’s where her body was found.”

Angry Khayelitsha residents on Tuesday night burned down a house belonging to the alleged killer.