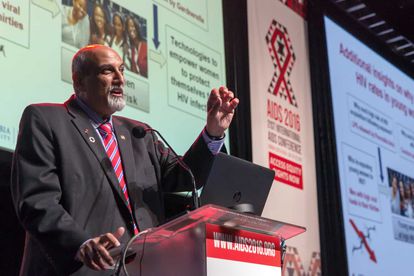 South African scientist, epidemiologist, Professor Salim Abdool Karim gestures as he delivers a speech for a conference on “Why do young women in Africa have high rates of HIV infection” during the second day of the 21st International AIDS conference in Durban in 2016. Photo: RAJESH JANTILAL/AFP

South African scientist, epidemiologist, Professor Salim Abdool Karim gestures as he delivers a speech for a conference on “Why do young women in Africa have high rates of HIV infection” during the second day of the 21st International AIDS conference in Durban in 2016. Photo: RAJESH JANTILAL/AFP

Epidemiologist and Director of the Centre for the Aids Programme of Research, Professor Salim Abdool Karim, said the principle of Ubuntu could save South Africa from the novel coronavirus.

Speaking to Nature, Professor Karim explained that COVID-19 “exposes the fault lines in our society”, and that the situation will change as the curve continues to increase.

How Ubuntu will shape our perception about COVID-19

When lockdown was first imposed, it slowed down transmission and many citizens questions if the strict protocols were necessary. Now that the virus is spreading faster than ever, South Africans might change their perception.

“I think when we get to a point where sufficient numbers of people have a relative or family member, or someone in their neighbourhood who has been sick or died from the virus, individuals are moved to collective action so that they can stand united again”.

Professor Karim said the principle of ubuntu — which means ‘I am because you are’ — will also extend to community safety. “I am safe because you are safe,” the professor adds.

South Africa’s leading expert on the pandemic saw the same scenario with HIV. He explained that people were pushed towards a change in behaviour when HIV began affecting those near and dear to them.

“We as a country are built on the principle of ubuntu. We have to rediscover that, or we won’t defeat this virus”.

He also warns that the worst isn’t over yet. COVID-19 cases are predicted to increase over the coming weeks and months, and could soon be reaching the 1-million mark of confirmed cases.

‘We had to face a difficult truth’

At the time of publishing, 421 966 South Africans have contracted the diseases and 6 343 have sadly lost their lives. Globally, we’re about 500 000 cases away from the 16-million mark in confirmed cases.

Unfortunately, “large parts of our country do not have the ability to institute social distancing, Professor Karim says, adding that “we had to plan that we would not be able to contain it while hoping that we would”.

“We had to face a difficult truth — that we were not likely to be able to contain the virus, and that the spread would probably rise exponentially as we eased lockdown restrictions. It was really difficult to say that to the entire nation”.

When asked about the accessibility of a vaccine, Professor Karim said that he hoped “we would be more involved in developing COVID-19 vaccines in South Africa”. He says we have the capacity, “built from HIVE where we are forerunners”.

If South Africa had been more involved in a leading role, we’d “have a seat at the table where decisions are made about the vaccine”, and also how it would be distributed. He explains why this didn’t pan out:

“Unfortunately, because we came to the epidemic late — it had already been through China, Europe, North America — we have had to take a supporting role in vaccines. […] Without a seat at the table, we will always be at a disadvantage and we’ll have to wait our turn”.

Professor Karim predicts that the United States will “probably want to take the first 200 to 300 million doses and then leave the rest for the rest of the world to distribute equally”.

Thankfully, he says, the World Health Organisation would be “facilitating this process”.