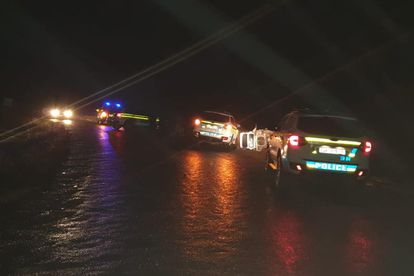 A suspected robbery was interrupted by South African Police Service (SAPS) officers in Nkandla when they confronted 13 people believed to be members of a gang outside a supermarket and a shootout ensued.

In the aftermath of the chaos, it emerged that two of the suspects had been shot and killed by police officers, while the other 11 were all arrested.

“In the early hours of Friday morning officers intercepted three vehicles used by the suspects. There was a shootout between the suspects and the police officers, which resulted in two suspects being fatally wounded,” read a statement from the office of Minister of Police Bheki Cele.

One of the three vehicles was flipped in the attempt to flee, lightly injuring four of the occupants and seriously injuring a fifth, who is under heavy police guard in hospital.

“A total of 11 suspects were arrested by police. Five firearms with ammunition were seized from the suspects. Police also seized explosives that were found in their vehicles. Three vehicles have been impounded pending further investigation,” the statement continued.

Despite being a potentially thwarted robbery, the charge sheet for the 13 people will be significantly longer after they were found to be in possession of illegal firearms and explosives.

“They will be profiled to establish their involvement in other violent crimes within the province.

“There is no place for thugs in this Province and criminals must expect police to fight back if they shoot at our men and women in blue. We call on all law abiding citizens to stand up and join police in eradicating crime within this province.”

As a result, the suspects will be charged with attempted murder, possession of explosives, illegal possession of firearms and ammunition, as well as attempted armed robbery when they appear in the Nkandla magistrate’s court on Monday 12 August.

“Crime intelligence remains a critical arm in crime prevention, the successes in the two provinces are highly commended,” Cele concluded.

#sapsKZN Two suspects were fatally wounded during a shoot-out and eleven arrested when police responded to a possible robbery in the Nkandla area this morning. Five firearms with ammunition, explosives and three vehicles were seized. #TrioCrimes MLhttps://t.co/MNOzCVG7GK pic.twitter.com/YcD4Dn3Ipt