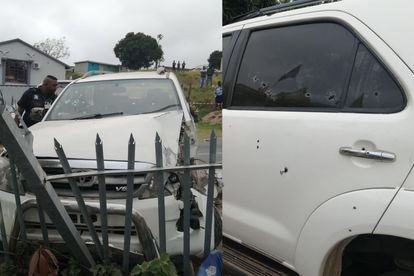 TWO PEOPLE SHOT AT IN A HAIL OF BULLETS

According to Reaction Unit South Africa (RUSA), the two people were killed in a drive-by shooting in Dawncrest, Verulam.

“Available Reaction Officers were dispatched to investigate at approximately 16:34.”

The company stated that two men who sustained multiple gunshot wounds were located inside the vehicle.

“RUSA Medics arrived on scene shortly thereafter and discovered that both men had been fatally injured. Several rifle and 9mm cartridges were recovered at the scene.”

“The suspects are believed to have been driving a white/gold Toyota Fortuner. Two houses were also struck by stray bullets,” the company reported.

CAUSE OF THE SHOOTING UNKNOWN FOR NOW

The motive for the murders has not been confirmed at this stage.

Meanwhile, on 26 August, RUSA also followed up on runaway robbers who fired blanks.

According to the company, robbers fired blank rounds while fleeing the scene of a robbery on Marshall Drive in Mt Edgecombe – KZN last Friday.

“Members of Reaction Unit South Africa (RUSA) arrived on scene at approximately 14:39 after receiving reports of shots being fired. It was established that three unknown males entered a business premises and held up the staff stealing an undisclosed amount of cash and cellphones. They fired shots as they fled the premises. Spent cartridges recovered at the scene are believed to be for blanks. The victims were not injured, the company detailed.