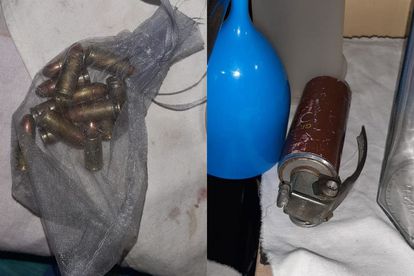 Two men were nabbed by the Hawks recently for the illegal possession of a firearm and an explosive.

THE TEAM ACTED ON INFORMATION RECEIVED

“The team received information regarding a suspect who was in possession of a firearm and a hand grenade.

“A search and seizure operation was conducted at an identified property in Galeshewe, Kimberley,” Thebe said.

THE PROPERTY WAS SEARCHED AND ITEMS WERE CONFISCATED

The property was searched, and the team recovered one Norinco 9mm pistol, with 21 9mm live rounds, and one South African Police issued stun grenade.

He furthermore said both suspects are expected to appear at Galeshewe Magistrate Court on Monday, 21 February 2022.

IN AN UNRELATED INCIDENT ANOTHER NC MAN WAS ARRESTED

Meanwhile, a 38-year old man was arrested on Thursday, 10 February 2022, for impersonating a peace officer and fraud.

Thebe said the man appeared in the Postmasburg Magistrate’s Court.

THE MAN ALLEGEDLY DEFRAUDED THE PUBLIC

The man allegedly defrauded the public by pretending to be the Chief of Traffic in Postmasburg.

“He promised people driving and vehicle registration papers in return for a sum of money.

“A number of people have come forward, claiming to have been defrauded by the suspect. Five cellular phones valued at R20 000 were seized from the man.”