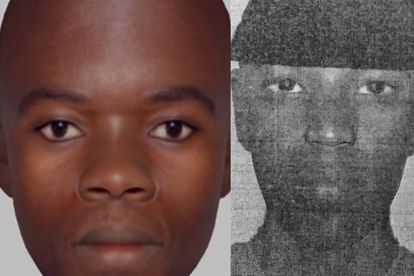 Free State police are searching for these two men in connection with two separate rape incidents in the Welkom and Grabouw areas.

WOMAN RAPED ON A FARM IN GRABOUW

He is wanted in connection with a rape case.

However, with the woman’s assistance, an identikit of the suspect was compiled for the purpose of the police investigation.

Should you have information regarding the suspect’s whereabouts, contact the Grabouw FCS Unit on 082 522 1019.

Alternatively, you can call Crime Stop on 08600 10111 or share information through the MySAPS App.

Meanwhile, the FCS Unit in Welkom is investigating a case of rape after a 32-year-old woman was raped by an unknown man.

The woman reported that she was at the hiking spot near the intersection in Koppie Alleen road in Riebeeckstad. Then, an unknown man accosted her from behind, said police spokesperson, Captain Stephen Thakeng.

“The man dragged the woman into the bushes where he repeatedly raped her,”

Adding that the woman was stabbed several times

He then fled the scene on foot with cash, cigarettes and a jacket that was taken from the woman.

After the rape ordeal, the woman was then assisted by a passing police member at about 20:00. The member took her to Bronville Police Station to register a case.

The suspect’s identikit was compiled.

The suspect is dark in complexion, slender build, 1,9 in height, he has a green ink tattoo on his left and right hand.

He was wearing a black bucket hat, black shirt and denim, and he was also speaking Afrikaans and Sotho.

Should you have information about the wanted suspect, contact Detective Sergeant Morongwe Ntholi on cellphone number 082 766 3502

Alternatively, call the Crime Stop Number 08600 10111 or submit your information through the MySAPS App.