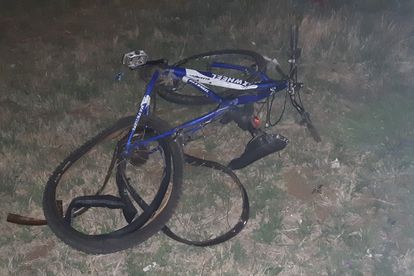 Two men were killed and another man injured when a motorbike collided with two men riding a bicycle on Barrage Road in Vanderbijlpark on Wednesday.

According to ER24 spokesperson, Russel Meiring paramedics arrived on the scene at 20h30.

Paramedics found two men lying in the centre median near their bicycle.

“Another man was found seated near his motorbike, which was in the middle of the fast lane.

“Paramedics assessed the patients and found that the two men that had been on the bicycle were in a critical condition, having sustained numerous injuries, while the motorbike rider had sustained moderate injuries.”

“After a short time, one of the critical patients’ vital signs began to diminish rapidly. Despite the best efforts of paramedics, the man succumbed to his injuries.”

He said once treated, the two other men were transported to nearby hospitals for further care.

“Unfortunately, upon arrival at the hospital, the second critically injured man succumbed to his injuries.

“The details surrounding this incident are unknown, but local authorities were on the scene for further investigations.”

Meanwhile, a 34-year-old man was left critically injured on Thursday when his taxi crashed head-on with a light motor vehicle on Pretoria Road in Kempton Park.

“ER24 arrived at 20h15 to find both the taxi and light motor vehicle in the middle of the road. Both vehicles had sustained a large amount of damage in the collision.”

Meiring said on closer inspection, and paramedics found the taxi driver lying a few metres away from his vehicle.

“Paramedics assessed the man and found that he had sustained serious fractures to both his legs, leaving him in a critical condition.”

He said the man was treated and provided pain-relief medication before being transported to a nearby hospital for further care.

“The details surrounding this incident are unknown, but local authorities were on the scene for further investigations.”

ALSO READ: Woman attacked and mauled by a pair of Pitbulls in Durban