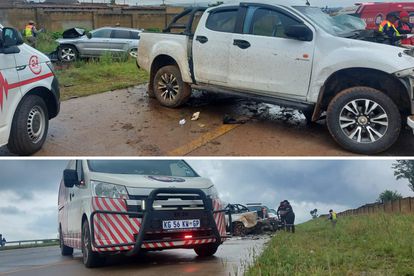 Two people were killed in a HORRIFIC accident near the Grasmere Plaza on Saturday morning.

TWO PEOPLE WERE KILLED IN THIS HORRIFIC ACCIDENT

According to ER24 spokesperson Ross Campbell, paramedics responded to the accident at around 10:47 on Saturday.

“Two adults, a man and a woman, have died in a collision between a double cab bakkie and an SUV on the N1 North near the Grasmere Plaza.”

Campbell said two other people were seriously injured in the accident.

ALSO READ: TikTok: How to keep your kids safe after TikTok tragedy

ER24 paramedics were on the scene with other private services, the Fire Department, and the JMPD.

“The man and the woman of unknown ages were found entrapped in the white double cab bakkie, having suffered fatal injuries. They were declared dead on arrival by both ER24 and another private service on the scene.

“One unknown patient from the SUV, believed to have suffered serious injuries, had already been transported to hospital from the scene by this time.”

SEVERAL EMERGENCY TEAMS WERE BUSY ON THE SCENE

He furthermore said a second seriously injured occupant from the SUV was treated using Advanced Life Support interventions. The person was then transported to a hospital by two other private services on the scene.

“At the time of this report, the Fire Department was waiting on the JMPD accident investigation team to finish before they could begin extraction of the deceased.”

DO YOU HAVE NEWS TIPS FOR US?

Do you have any news tips for us? We would to hear from you. Please WhatsApp your photos to  060 011 0211. Please remember to include your name, surname, and as much details and information as you have. You are, of course, welcome to send anonymous tips and information.