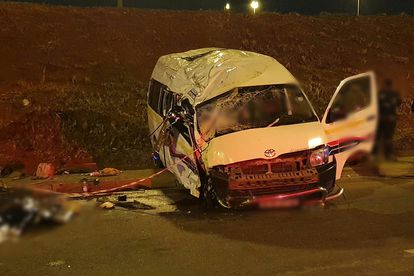 A horrific accident at the intersection of the R25 and the R21 in Thembisa on the East Rand of Gauteng claimed the lives of two people and left 15 others injured.

AN ON-SCENE TRIAGE AREA WAS ESTABLISHED

According to Emer-G-Med Kyle van Reenen the accident happened at approximately 8pm on Sunday.

“Paramedics responded to the scene of a collision involving a minibus taxi and a light motor vehicle at the intersection of the R25 and the R21 in Thembisa on the East Rand of Gauteng.”

He said on arrival on the scene it was found the two vehicles had collided head-on, resulting in the taxi overturning.

“Two commuters were found to have sustained fatal injuries and were declared deceased on the arrival of paramedics.

“Fifteen other people suffered injuries ranging from minor to moderate. An on-scene triage area was established, and the patients were treated and stabilized before being taken to various nearby hospitals for further care.”

Van Reenen said the cause of the collision is unknown and will form the subject of a South African Police Services investigation.

Meanwhile, three women were killed and another seriously injured when the car they travelled in overturned several times on the N12 near the Nancefield bridge in Lenasia.

THE ACCIDENT HAPPENED JUST AFTER 7PM ON SATURDAY

“Paramedics from ER24 and other services arrived on the scene, where they found the car lying on its side in the centre median of the highway.”

“Sadly, paramedics could do nothing for them, and they were declared dead on the scene. Another woman was found with serious injuries and later rushed by ER24 to Chris Hani Baragwanath Hospital.”