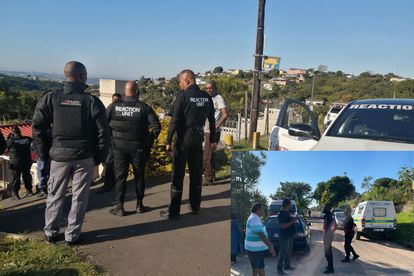 Two houses were robbed simultaneously in Trenance Park, KwaZulu-Natal by ten armed robbers, while the third one was robbed 12 minutes prior and a security officer was kidnapped.

Reaction Unit South Africa (RUSA) had their hands full this morning with a group of armed robbers who kidnapped a security officer in a home invasion and robbed two houses simultaneously.

The security officer was kidnapped during a home invasion on Kingfisher Road in Dawncrest in the morning by at least ten men.

According to RUSA spokesperson Prem Balram, their members were dispatched to a residence at approximately 08:42.

When they arrived at the scene, it was established that at least ten suspects forced their way into the house.

“They ransacked the home in search of valuables. The robbers also entered a CMT factory which was operating on the rear of the premises. The staff locked themselves in the toilet when they realised the premises was being robbed,”

He added that the robbers stole several handbags, a TV, cellphones and jewellery.

Furthermore, they kidnapped a security officer who was conducting street patrols before they sped off in a silver Mercedes Benz and a silver VW Jetta 5.

Balram said the security officer was dropped off a few kilometres away from the scene.

THREE HOUSES WERE ROBBED BY AN ARMED GANG

Meanwhile, after their first attack, the robbers allegedly proceeded to rob two families living on Cottonwood Drive in Trenance Park

“Suspects in a silver VW Polo and another unknown vehicle forced themselves onto the premises. They entered the home at approximately 09:03 and held up two families living on an adjoining property,”

He further said that a grey VW Tiguan was taken by suspects. It was later recovered in a joint operation by Reaction Unit South Africa, Tracker, SAPS Verulam, Marshall Security and SBA Security.

The vehicle was recovered in Shukuma Place in Inanda.

The robberies are believed to have been committed by the same group.

ALSO READ: One suspect KILLED in a shootout and high-speed chase with police