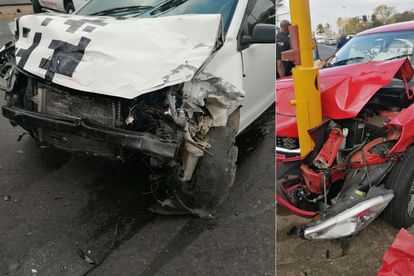 Two people were transported to hospital by ambulance following a head-on collision on the R102 at the Verulam intersection in KZN this afternoon. Photo: Reaction Unit South Africa / Facebook

Two people were transported to hospital by ambulance following a head-on collision on the R102 at the Verulam intersection in KZN this afternoon. Photo: Reaction Unit South Africa / Facebook

A head-on collision on the R102 at the Verulam intersection in KwaZulu-Natal resulted in two people being hospitalised.

The incident occurred on Sunday, 11 September

The accident occurred in the afternoon of Sunday, 11 September. Reaction Unit South Africa (RUSA) stated that passing motorists contacted them around 14:45 requesting assistance at the scene.

RUSA medics and reaction officers made their way to the R102 Verulam intersection and found a white VW Polo and red Suzuki Swift that were extensively damaged. The two vehicles were blocking a section of the northbound lane.

The Suzuki crashed into a robot after the initial impact

According to RUSA, the Suzuki Swift struck a robot following the head-on collision. The jaws of life were used to free a passenger from the Suzuki Swift who was trapped inside the vehicle, said RUSA.

While the two passengers from the Suzuki Swift sustained moderate injuries and were transported to hospital by ambulance, the VW Polo occupants faced minor injuries. RUSA stated that the circumstances leading up to the collision were not immediately established.

“Circumstances leading up to the collision were not immediately established,” said RUSA.

Previously, it was reported that eleven people were killed in a head-on collision between two light motor vehicles on Sunday afternoon, 4 September, in the Northern Cape. The accident occurred along the N14 Kuruman/Vryburg road near Mothibistad.

According to paramedic service, ER24, emergency services arrived at the scene at approximately 16:50 and found the wreckage of the two vehicles in the middle of the road. “Debris from the vehicles was spread across the scene,” said a spokesperson.

One man was found lying outside the vehicles. Ten other people – five in each car – were trapped in the wreckage. Medics assessed the patients and found that all of them had already succumbed to their injuries. The South African Police Service (SAPS) in Mothibistad are investigating a case of culpable homicide in the wake of the head-on collision. Read the full story here.