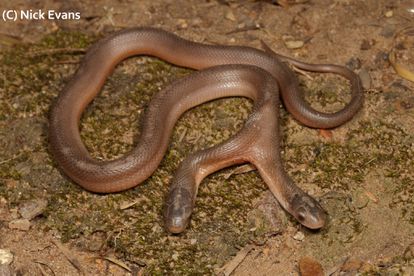 This is certainly something one doesn’t get to see everyday; KwaZulu-Natal based snake rescuer, Nick Evans has rescued a two-headed snake in Ndwedwe.

Evans said the two-headed snake is a Southern Brown egg eater which is common and harmless.

Evans said two-headed snakes have hatched in captivity and in the wild, but it’s very rare, it is a deformity. The snake was spotted by a man in his yard in Ndwedwe.

“I’m sure he was just as surprised as me! He didn’t want anyone to harm it, and put it in a bottle. He asked me to collect it and take it away from there. I thought that was really nice of him. Having never seen a two-headed snake, I jumped at the opportunity,” Evans said.

The snake rescuer also added that it was such a strange sight, seeing this deformed snake.

“It’s a juvenile, around 30cm in length. It was quite interesting to see how it moved. Sometimes, the heads would try to go in opposite directions from one another, other times, it would rest one head on the other. That seemed the most effective way of moving,” he said.

WHERE IS THE SOUTHERN BROWN NOW?

Evans said the snake is in professional care now and there is no point releasing it. Southern Browns generally don’t live long, reportedly.

Evans said this one wouldn’t last long at all in the wild. It can barely move, and when it does, it does so incredibly slowly which makes it an easy picking for a predator.

“If it hatched months or weeks ago, and survived this long, I’ll be truly surprised. I’m intrigued to hear if it can feed on its own or not.

“They only eat bird eggs, so it will have to be tiny eggs! We want to try and learn as much as possible from this little one. I am grateful to the resident for saving the egg-eater, and to him and his brother for calling me.”