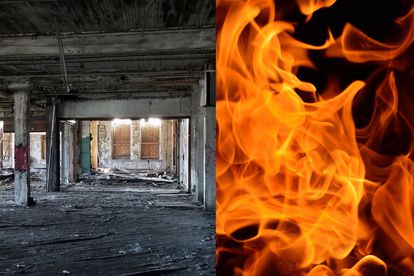 Paramedics said two burnt bodies and two men who were critically injured were found near an abandoned building in Potchefstroom Industrial. This sounds like something straight out of a horror movie.

THE TWO MEN WERE SET ALIGHT AND LEFT FOR DEAD

According to ER24 spokesperson Russel Meiring, paramedics responded to the incident on Sunday morning.

“At 05h00, ER24 arrived at the Ikageng Police station after a man was brought in with burn wounds. On assessment, medics found that the man had sustained burn wounds over most of his body, leaving him in a severe condition.”

Meiring said the man was treated and provided with advanced life support before he was transported to a nearby hospital for further care.

THIS HORROR SCENE PLAYED OUT AT AN ABANDONED BUILDING

“At 07h00, ER24 and Mooirivier Beskerming First Responders were called to an abandoned building in the Potchefstroom Industrial area. On scene, medics found a man with numerous burn wounds lying far away from the building.”

He furthermore said the man was treated and provided with advanced life support before he was transported to a nearby hospital for urgent care.

TWO BURNT BODIES WERE FOUND INSIDE THE BUILDING

“Unfortunately, both patients had already succumbed to their numerous burn injuries. Nothing could be done, and they were declared dead by the Mooirivier Beskerming First Responders.

“The exact details surrounding this incident are unknown, but local authorities were on the scene for further investigations.”

ALSO READ: Have you seen the KIDNAPPED Anichka Penev?