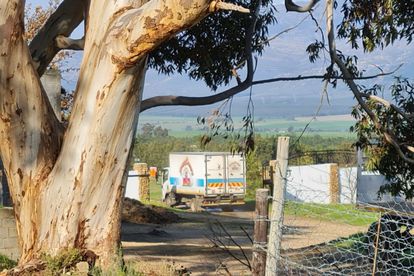 The gates to the property where development has commenced on a factory chicken farm. Residents claim that the project has been conducted illegally, and launched a petition to prevent further construction of five chicken barns. Photo: Dan Meyer

The gates to the property where development has commenced on a factory chicken farm. Residents claim that the project has been conducted illegally, and launched a petition to prevent further construction of five chicken barns. Photo: Dan Meyer

Residents of the small farming town of Tulbagh in the Western Cape fear that plans to develop a chicken factory farm right on their doorstep will endanger property values and lead to environmental destruction, with accusations levelled against the property’s owners of commencing with the project in bad faith and without approval.

Concerned residents launched a petition earlier this month, in which they claimed that development on the factory farming operation has begun prior to Pier Passerini – the Managing Director of Windmeul Eggs and Humpty Dumpty Eggs – having procured the requisite approvals.

Residents claim that Passerini – who has already begun development on one of five proposed chicken barns situated amongst some of Tulbagh’s premier lifestyle farms – did so illegally without the relevant planning permission and approved Environmental Impact Study which would have given the community an opportunity to object. They referred to letters from environmental consultants hired by Passerini at the GNEC law firm – seen by The South African – that concede that development commenced prior to the the Environmental Impact Study have been completed.

In a response to resident’s complaints on 17 June, GNEC admitted that the “applicant is currently unlawful”, and said that subject to the final assessment of the project’s compliance, the owners may be “issued a fine for the unlawful part, or they can decide to decline environmental authorisation, issue a fine and request the applicant to demolish the unlawful activity”.

The authors of the petition listed the following concerns:

Residents who launched the petition – which has garnered over 2 500 signatures to date – said that the “illegal construction” of the chicken factories, as well as local government’s failure to intervene, constitutes “a breach of our constitution and fundamental human rights to protect the livelihood of our citizens and natural abundance we are blessed with”.

“Deep corporate pockets should not be able fly above the law, squashing the ‘little guys’ and the environment in the process,” the aggrieved neighbours charged.

“If these unlawful developments are not stopped it paves the way for future ‘unlawful’ development – giving people the confidence to do whatever they please.”

Christopher Normann from La Bruyere farm – which is located a stone’s throw away from the factory gates – said that should the chicken farm be allowed to operate, their business will undoubtedly be adversely affected by increased noise and traffic on the already dilapidated road they share with Passerini’s Tulbagh property. He also voiced their disappointment with the Department of Environmental Affairs in the Western Cape, who he said had heard their complaints but made no effort to take legal action to prevent further development once preliminary investigations took place.

“The first factory was built illegally without the relevant planning permissions, and 20 000 chickens were introduced before an approved environmental impact study was completed, which would have given the community an opportunity to object,” he said, adding that the factory is only eligible to accommodate 5 000 chickens before an impact study is completed.

“We feel government has failed to uphold the law, our complaints during construction were ignored or only followed up on when it was too late,” he said.

The South African reached out to Passerini, who declined to comment on the record but indicated that the claims being made against his business were unsubstantiated. He cited the impact of the COVID-19 pandemic and the spread of avian flu as issues already hindering the agricultural sector, and said that his business has suffered as a result.

An environmental impact study was retrospectively conducted to the commencement of development on the chicken factories, however several fields were left incomplete, leaving the aggrieved Tulbagh residents who launched the petition unsatisfied with its findings.

Environmental Impact Assessments are a mandatory process of assessing the environmental consequences and viability of a project, and ways of mitigating harm. The process requires that an open and transparent engagement with the public take place so that stakeholder concerns are properly taken into account.

Despite severals attempts to get comment, the department has been unable to divulge any information, when requested by The South African earlier this month.