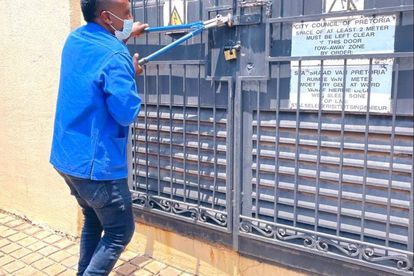 The City of Tshwane said they have been paying their outstanding bill with Eskom. PHOTO: Twitter/@CityTshwane

The City of Tshwane said they have been paying their outstanding bill with Eskom. PHOTO: Twitter/@CityTshwane

The City of Tshwane says that the threats by Eskom to cut off power in the municipality are unwarranted. But the power utility was also not being completely honest about Tshwane’s payment plan.

The power utility has threatened to disconnect the City of Tshwane’s electricity due to an outstanding bill of R1.6 billion.

According to Eskom, Tshwane has only paid R68 million, which made a little dent in the massive debt.

“The inconsistent payments are both untenable and unacceptable since Eskom’s financial position is well known. The City’s persistent failure to honour its payments places a huge burden on Eskom to continue providing it with electricity,” said Eskom spokesperson Sikonathi Mantshantsha.

But this is not entirely true. Tshwane MMC for Finance Peter Sutton said such statements by Eskom are misleading.

“It is important to point out that Eskom’s media statement, which indicates that we offered to settle the outstanding amount within 76 days, is misleading.”

ALSO READ: Eskom forges ahead with plan to disconnect City of Tshwane

TSHWANE ONLY OWES FOR THE MONTH OF JULY

Eskom had said that the City of Tshwane has not yielded any results and continues with the same payment pattern.

But the outstanding debt is only related to the month of July, said Sutton.

“We would like to reiterate that the outstanding amount owed to Eskom only relates to July 2022 and all prior debt has been paid. Furthermore, the outstanding balance on the current account is only 14 days in arrears.”

He did not take well to threats by the power utility to cut the municipal’s power supply. He said should they act on their threat, Tshwane will not take it lying down.

“Let me be clear in stating that such action would be unlawful and there is already legal precedent indicating such. Should any such action be pursued, the city will immediately interdict Eskom from proceeding. We have further taken note that Eskom will declare a dispute in terms of the Intergovernmental Relations Framework Act, 2005 (Act 13 of 2005), and we await further communication in this regard.”

ALSO READ: City of Tshwane residents could live in the dark SOON – Here’s why