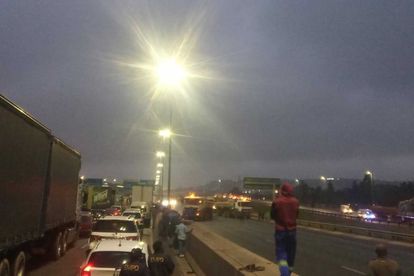 Some commuters were in for delays, particularly along the R24 in Edenvale, in the East Rand in Gauteng, as several trucks blocked oncoming traffic in the early hours of Monday, 5 October 2020.

There is much uncertainty surrounding the details of the strike – including whether truck drivers were even downing tools. Frustrated motorists were amongst the first to take to social media about the strike, urging others to make use of alternative routes.

“In Edenvale several trucks have blocked off the R24 East just before the N12 split – there’s a protest going on there – expect more than an hour delay from the Gillooly’s interchange heading towards Kempton Park Boksburg,” said on Twitter user.

Flow of traffic has improved

The Ekurhuleni Metro Police Department (EMPD) rushed to the scene to man the situation and a sense of normalcy was restored. The EMPD said traffic was flowing slight faster than before.

“Looking at the flow of traffic in and around Ekurhuleni, the N12 freeway, direction east by R24 in the Bedfordview area by Edenvale, was earlier on partially closed from traffic from 05:00 to 06:30, due to what seemed to be protest action. It is not yet clear at this stage why there was a demonstration,” said EMPD spokesperson Kobeli Mokheseng.

Mokheseng further added that they would continue keeping an eye on any developments that may arise.

“But working together with the South African Police Service (SAPS) and other law enforcers, we are working together to monitor the situation on the freeway. Motorists have been advised to exercise precaution,” he said.