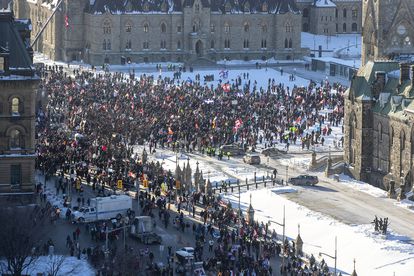 Ottawa Mayor Jim Watson urged the federal government to send an additional 1,800 police officers and appoint a mediator to work with protesters to “end this siege” that has dragged on for 10 days, infuriating local residents with incessant honking and diesel fumes.

On Sunday, Watson declared a state of emergency in the capital, declaring the protests “out of control.”

City police chief Peter Sloly also called for more help, saying “we have to end this demonstration, we cannot do it alone.”

In a symbolic win for angry residents of the city, the Superior Court of Ontario on Monday ordered protesters to stop honking their horns.

Some locals have launched a class action against the organizers of the chaotic protest, claiming some Can$10 million (USD$7.9 million) in compensation for the disruption.

The “Freedom Convoy” demonstrations began January 9 in western Canada as protests by truckers angry with vaccine requirements when crossing the US-Canadian border, but have morphed into broader protests against Covid-19 health restrictions and Trudeau’s government.

Protest organizer Tamara Lich said Monday that activists were willing to engage with the government to find a way out of the crisis, but insisted that pandemic restrictions be eased.

“What we’re trying to do right now is reaching out to all of the federal parties so that we can arrange a sit down,” Lich said during a meeting streamed on YouTube.

“So that we can start these talks and see how we can move forward, have their mandates and the restrictions lifted, restore Canadians rights and freedoms and go home.”

Facing criticism for allowing the center of the capital to be blocked and many businesses to have to close, Ottawa police Sunday announced new measures to tame the protests by banning people from bringing fuel and other supplies to the rallies.

“Anyone attempting to bring material supports (gas, etc) to the demonstrators could be subject to arrest,” the police said on Twitter.

But after the fundraising site GoFundMe cut off the protesters, saying they had violated its policy against content that “promotes behaviour in support of violence,” organizers launched a donation drive on GiveSendGo, which describes itself as the “leader in Christian fundraising.”

More than $4.7 million has been raised on GiveSendGo as of Monday.

Trudeau, who has been in quarantine after testing positive for Covid-19 a week ago, did not comment on the weekend protests.

On Thursday he ruled out the possibility of deploying the army to disperse the protesters “for now,” saying that one must be “very, very cautious before deploying the military in situations against Canadians.”

“Trudeau has nothing to gain by going to speak to the demonstrators,” Genevieve Tellier, a political scientist at the University of Ottawa, told AFP.

But another political analyst, Frederic Boily of the University of Alberta, said the protests could escalate into a full-blown political crisis.

“Justin Trudeau reacted badly initially,” Boily said. “He reacted too strongly and too abruptly at the start of the protests when he tried to paint them as a far-right protest.”

Boily added that Trudeau “added fuel to the fire” by turning vaccination into a political issue, especially during last summer’s election campaign.

But the opposition also finds itself in a bind politically.

The Conservatives, who will soon be voting to elect their new leader, are themselves divided on the issue of the protests.

“They are afraid that part of their supporters will be tempted by the extreme right, but it is a risky bet for them,” said political analyst Daniel Beland.

While only about 10 percent of Canadian adults remain unvaccinated, as many as 32 percent of the population support the anti-mandate protests, according to a recent survey.

By Mick Gzowski with Genevieve Norman in Montreal