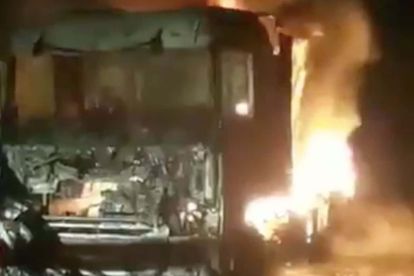 A truck was torched on the R618 on Thursday 4 June.

A truck was torched on the R618 on Thursday 4 June.

Protesters furious over the lack of water being supplied to their town in KwaZulu-Natal (KZN) have  torched a truck late on the evening of Thursday 4 June.

KwaMsane in northern KZN has been without water for weeks now, with the scarcity of the critical resource an ongoing issue perpetuated by drought, coal mining activities as well as service delivery deficiencies.

The protests have taken a sinister turn though, with the driver of the torched truck lucky to have escaped unharmed.

Police spokesperson Captain Nqobile Gwala said that the truck was brought to a halt just before midnight on Thursday, with assailants having hauled petrol bombs at the vehicle with the driver still inside.

“KwaMsane are investigating a case of malicious damage to property,” he said. “It is alleged on 4 June 2020 at 23:45, a truck driver was driving his truck on the R618 at Somkhele area when he stopped after guard rails were placed on the road.”

“Whist trying to reverse he was approached by three suspects who threw an petrol bombs onto the truck.”

“No injuries were sustained. The matter is still under investigation.”

The taps have run dry in the the area several times over the last few years, and this latest water crisis has brought about severe frustration at local government’s failure to deliver water to Somkhele.

Medical Nziba, a resident from the area told NGOpulse that with the Covid-19 pandemic requiring heightened levels of  sanitation in order to stem the spread of the virus, the people in her community are finding it impossible to comply without water.

“We have heard again and again from radio and television to wash our hands frequently with water and soap, and that is the effective way to eliminate viral particles on our hands.  The advice is difficult for us.

“The nearest water resource is far away from our home, we must walk for 2 kilometres.  Government is failing to assist us to overcome this obstacle for many years and even now during this challenging time of fighting the coronavirus.”

“We are worried if the spread of the virus penetrated our villages, how do we get water to use in need and stay safe?”