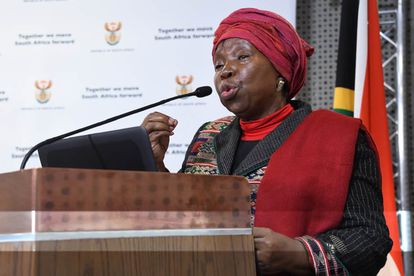 Minister Nkosazana Dlamini-Zuma has been asked to use her power as the leader of COGTA to help South Africa find a way past its confusing new ‘travel list’. The high-risk exclusion document forbids tourists from 60 countries entering Mzansi, many of which are key markets for our blighted tourism industry.

France, the US, the UK, and The Netherlands are just a few of the nations that are ‘off-limits’ when it comes to sending tourists to the Republic. Earlier on Wednesday, we reported that a handful of major European airlines where holding crunch talks to reduce the number of countries which appear on the high-risk travel list.

However, those sentiments have been reinforced by some domestic forces. David Maynier, of the Western Cape Government, has filed an impassioned submission with Dlamini-Zuma this afternoon. He has implored the government to dump the ‘risk-based travel list’, labelling it ‘extreme’.

The DA representative argues that the industry’s very survival depends on the easing of the rules which were introduced one week ago, during a chaotic press briefing that led to a number of amendments over the following 24 hours:

“The risk-based country approach should be abandoned. The motivation for this is that there is no greater risk for transmission of the Covid-19 virus based on the purpose of travel, yet the negative impact of continuing to limit the entry of leisure travellers to South Africa, especially from our key source markets, is severe and extreme.”

“The full reopening of our borders to leisure travellers, with stringent health protocols in place, ahead of the summer season is absolutely critical to the sector’s immediate recovery and long-term survival. We’ve an opportunity to begin economic recovery by allowing tourists from the Northern Hemisphere, seeking sunshine during their winter months.”

“Furthermore, at present, the Home Affairs minister has proposed that the list of high-risk countries will be reviewed and updated every two weeks. However, any system that introduces uncertainty for travellers that need to plan and book in advance creates an immense barrier for forward bookings.”

Maynier and his colleagues feel like they have a particular duty to bat for the tourism industry, given that the Western Cape’s economy relies largely on international visitors. The multi-billion rand cornerstone of economic development cannot withstand another battering, and the MEC has argued a few more changes should be made to the rules: