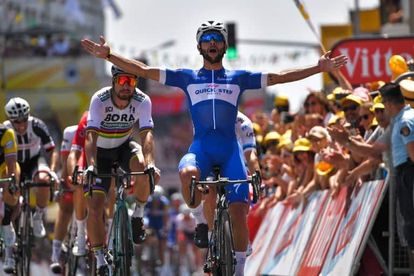 Colombia’s Fernando Gaviria celebrates as he crosses the finish line to win the first stage of the 105th edition of the Tour de France cycling race between Noirmoutier-en-l’ile and Fontenay-le Comte, western France, on July 7, 2018. / AFP PHOTO / Marco BERTORELLO

Colombia’s Fernando Gaviria celebrates as he crosses the finish line to win the first stage of the 105th edition of the Tour de France cycling race between Noirmoutier-en-l’ile and Fontenay-le Comte, western France, on July 7, 2018. / AFP PHOTO / Marco BERTORELLO

High drama on day one of the Tour de France.

Chris Froome, who his bidding for his record-equalling fifth Tour de France title and has received a pretty tetchy welcome, crashed on the opening day, losing precious seconds in the process. It was a pretty benign crash – watch it here – but it perhaps set the tone for what is expected to be a feisty race.

But the sprint finish and the win belonged to Fernando Gaviria, who became the first Tour debutant to win on his opening day on the race since Fabian Cancellara claimed the prologue in Liege in 2004. He held off Peter Sagan and Marcel Kittel in the final dash.

Froome crashed with around 6km to go, flying over a barrier and landing in a grassy patch. He was unhurt, but the peloton went speeding off, leaving him far behind the bunch.

Froome expressed both relief and his usual quiet confidence after the race.

“We knew the first days were going to be tricky, what happened is part of the game,” said the 33-year-old who had a skinned knee and some possible bruising on his right shoulder after his head over heels fall.

“It was getting quite chaotic up at the front with the sprinters getting into position.

“There wasn’t much the team could have done for me,” he said after being accompanied across the line by Luke Rowe. I’m just relieved that I’m not injured.”

Froome, who fell heavily before the Giro d’Italia prologue but rallied two weeks later to two spectacular stage wins that won him the Tour, added:

“There’s still a great deal of road on the way to Paris.”

Gaviria was left thrilled after his impressive stage win on his very first Tour de France, achieved after he outlasted world champion Sagan in a long struggle down an 800m home straight with Kittel, who won four stages on the 2017 Tour, leaving his bid too late and coming third.

“I just said to myself ‘go’ and had the legs luckily,” Gaviria said.

“What an amazing day, nobody is happier than me. The team did amazing. Tomorrow I’ll be in yellow and try and keep it as long as possible.”

“I don’t know about keeping the yellow jersey because of the mountains, but I plan to fight for the green jersey (sprint points) all the way to Paris.”

Watch: Gaviria wins the sprint on day one of the 2018 Tour de France