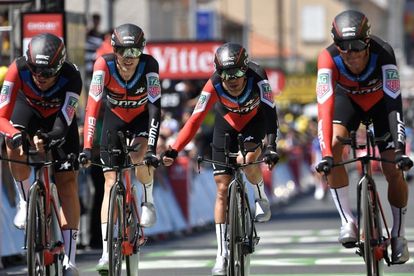 Olympic gold medalist Greg van Avermaet goes into the yellow jersey after an impressive team ride from the squad.

The 35.5km course around Cholet saw the teams buffeted by crosswinds, with some dealing with the conditions decidedly better than others.

Team leader Richie Porte also comes out as a big winner as the Alps loom large later in the week.

Porte’s former team Sky had a funny spell when Wout Poels and Luke Rowe disappeared off the back of their train.

But they came through strongly with reigning champion Chris Froome leading from the front amid the boos from the pavements.

Not strong enough, through.

And the same applied for Quick-Step Floors, who were the penultimate side to hit the road.

Five seconds quicker and veteran Philippe Gilbert would have snatched yellow from his fellow Belgian, but alas.

Nairo Quintana was the big general classification loser, ceding another 49 seconds to Froome and Sky with his depleted Movistar team.