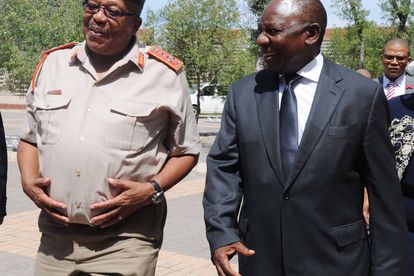 The focal point of the South Africa National Defence Force (SANDF) – its combat services – along with Defence Intelligence counts just 97 generals out of more than 400 in the Department of Defence (DoD)/SANDF structure, according to a research paper prepared for the Portfolio Committee on Defence and Military Veterans (PCDMV).

In essence, the document says, this translates into one general, admiral, or equivalent official for every 184 people in the DoD/SANDF.

The DoD annual report for the 2018/19 financial year notes there were 275 senior and top management level employees in the then total personnel strength of 74 508.

“This equates to one senior manager for every 269 people in the DoD.”

The paper also expressed “concern about the DoD being top-heavy was raised previously by the Defence Force Service Commission (DFSC),” further pointing out that senior representatives of Minister Nosiviwe Mapisa-Nqakula’s department “conceded the DoD is somewhat top-heavy.”

The report asks the PCDMV to ascertain the reasons for the rank inflation from “senior military leaders.”

He is quoted as telling a Joint Standing Committee on Defence (JSCD) meeting that rank inflation poses “a major risk” to a sustainable DoD as far as personnel strength and costs are concerned.

Practice dates back to apartheid-era SADF

This phenomenon dates back to the then SA Defence Force (SADF), forerunner of the SANDF in what is now democratic South Africa.

Rank inflation continued after 1994 with a marked increase in the number of senior positions while junior positions declined according to Heitman, a member of Roelf Meyer’s Defence Review Committee, appointed by then Minister of Defence and Military Veterans Lindiwe Sisulu, in 2012.

Another example in his presentation to the JSCD is SA Army directors going from colonel posts with a small staff to brigadier generals with several colonels and many other officers on their staff at the same time as the corps became smaller.

“Several such brigadier generals are, for example, in command of only a military school or training institution and one or two units other than reserve units (often defunct) under their control.”

There are similar examples in the SA Air Force (SAAF) from a brigadier (before the new rank system was introduced) handling personnel matters to a brigadier general in each of the Air Office and Air Command.

This despite a centralised Human Resources Division.

The SA Navy (SAN) also has many senior admirals for a relatively small navy with limited vessels.