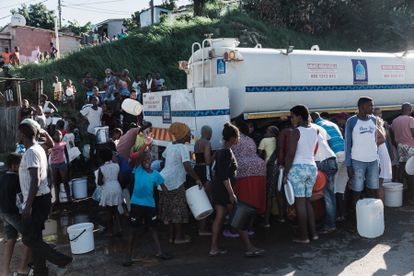 Tongaat residents will have to continue relying on water tankers as the eThekwini Municipality has stopped the water supply from the Tongaat South Reservoir.

The supply was stopped through the emergency pipeline from Nyaninga Reservoir to the Tongaat South Reservoir and this will be the case until further notice.

The eThekwini Municipality said the decision was taken in the interest of ensuring that tap water is of good quality.

It further said it has detected that water from boreholes privately constructed by residents is seeping into the reservoir’s reticulation.

“Water from boreholes is not suitable for cooking and drinking but is fine for other uses. Despite the supply from the Tongaat South Reservoir having been shut down, the City has been alerted that some consumers within this zone are still receiving water. Those residents are advised not to use the water for drinking purposes or to boil it before use.”

Areas that feed from the affected reservoir include:

Water supplied through water tankers is reportedly not affected. The Municipality further urged residents with boreholes to register with eThekwini Water and Sanitation department.

On 26 August 2022, the Democratic Alliance in KwaZulu-Natal, visited the home of Suraj Baijnath who tragically lost his wife, Rashnie Baijnath, after allegedly drinking contaminated municipal water in Birchwood.

Birchwood residents had been cautioned by eThekwini to not drink or cook with the tap water as it was unsafe to do so. A few days later, the municipality said the issue detected has been fixed and water is safe to drink only to backtrack on that again.

According to the DA, on 10 August 2022, Rashnie Baijnath died after consuming municipal water. The cause of death was noted as “diarrhoea”.

Community members also informed the party that they also experienced mild symptoms of diarrhoea that eventually led to the municipality cutting the water supply. To date, they are dependent on water tankers and donations from NGOs for clean water.