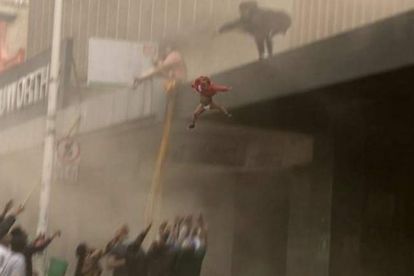 The parents of a toddler that was thrown to a crowd from a burning building in Durban say they are worried that their daughter might have been traumatised by the ordeal, as she regularly utters many words from that day.

The City Life Pearl Towers in the corner of Anton Lembede (previously known as Smith Street) and Joe Slovo (previously known as Field Street) in Durban was allegedly set on fire with people trapped inside. Several videos shared on social media showed women and children escaping through small exits in the middle of the building.

Two-year-old Melokuhle’s story is one of the biggest stories which made global headlines during the week.

Melokuhle’s parents told TimesLIVE that there has been some trauma left in her memory.

Providing details about the ordeal, Melokuhle’s mother mother, Naledi Manyoni says smoke had already reached their floor (16th) and blocked their sight to the point that they couldn’t find direction.

“The lifts had stopped working and everybody was running to save themselves. Melokuhle cried frantically, but all I cared about was getting her out alive. I did not care that she was crying at the time as long as she was saved,” she said.

Manyoni, from Folweni, south of Durban said she was so scared to throw her daughter as people on the ground were screaming ‘muphonse, muphonse’ (throw her, throw her).

“I started panicking because all I could see down there was a woman standing alone to catch my daughter. I hesitated for a bit while holding her until a few more people joined and raised their arms to catch her,” she added.

“There has been some trauma left in her memory. It visits her and is easily triggered. Every now and then she utters the words ‘muphonse, muphonse’ (throw her, throw her), which is what people were screaming to her mother that day. The ordeal still replays in her head even today. But she is a strong young girl,” the toddler’s father, Simthembile Matomane said.