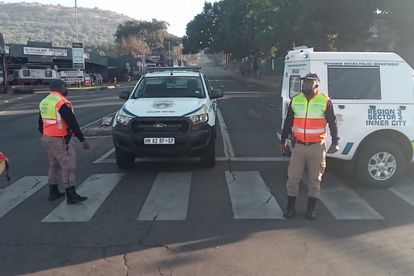 Two Tshwane metro police department (TMPD) officers are facing suspension. The two are behind bars for allegedly extorting a bribe out of a motorist.

The two allegedly face charges of harassment and extortion for soliciting a bribe from a resident, said Tshwane MMC for Community Safety Grandi Theunissen.

RESIDENT PAYS BRIBE OUT OF FEAR

The female resident living in Pretoria East opened a case of harassment and extortion against the officers.

During her encounter with the TMPD, she felt unsafe. She said she was intimidated to a point where she paid the two officers a bribe, said Theunissen.

The officers had followed her home in Erasmuskloof. They then allegedly forced to take accompany her to an ATM to withdraw R3 000 cash, Theunissen said.

“She said the ATM was out of order and they then decided to rather use a money transfer service.”

The resident turned to the municipality about the incident. Theunissen said he immediately reached out to her for support and to ensure action is taken.

“Arrangements were made for the officers who were on duty on Monday, 11 July 2022, to report to Garsfontein police station where they were questioned and eventually arrested.”

Tshwane has initiated the required internal processes to suspend the two officers pending the criminal case.

Theunissen emphasised that the City of Tshwane takes a zero-tolerance approach to bribery, corruption or any illegal acts by their officers.

“Incidents of corruption will be dealt with decisively without fear as we root out those who abuse their power and fail to uphold their oaths of office. I will ensure that the matter is properly investigated and dealt with accordingly internally.”

The City of Tshwane is currently working on a programme to curb lawlessness, corruption and bribery within its officers to deal with those who extort residents, said Theunissen.