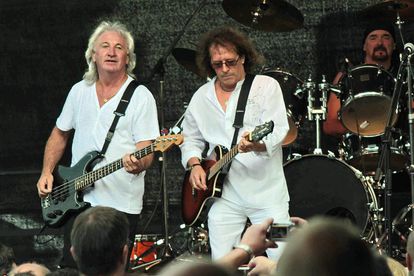 Tickets for the nostalgia rock band Smokie are among those offered on Viagogo’s South African website. Photo credit: Wikimedia Commons

Tickets for the nostalgia rock band Smokie are among those offered on Viagogo’s South African website. Photo credit: Wikimedia Commons

Viagogo, the Swiss-based online event ticket reseller and ticket exchange company that operates in a number of markets including South Africa, has been with a massive R82-million by an Australian court for misleading and overcharging consumers in that country.

The Federal Court judge who levied the penalty of AUD7-million last week described the misrepresentations made by Viagogo on its Australian website as “serious” or “very serious”, and considered the conduct demonstrated a “level of deliberateness”. He described one category of misrepresentations as having been made on “an industrial scale”.

Justice Burley found that the company had misled consumers by, among other things, saying that it was the ‘official’ seller of tickets to particular events when it was not, and that certain tickets were scarce when they were not.

Final ticket cost was much higher

Viagogo also misled customers about the pricing of tickets. Tickets were promoted at a certain price, but when fees were added – which had not been disclosed up front – the final cost was far higher.

The offences took place over a two-month period in 2017 and involved tickets being sold for the Ashes cricket series between England and Australia, as well as tickets for the Book of Mormon musical.

Legal action was brought by the Australian Competition and Consumer Commission, which said at the conclusion of the court case that “Viagogo’s business practices were unacceptable”.

In South Africa – where it must be stressed that Viagogo has not been accused of similar offences – the website offers a range of tickets for events such as the British and Irish Lions Rugby Tour, Kirstenbosch Summer Sunset Concerts, nostalgia rock group Smokie and singer-songwriter Jeremy Loops.

The website tells consumers: “We’re the world’s largest secondary marketplace for tickets to live events. Prices are set by sellers and may be below or above face value.”

In a statement carried by the Guardian Australia newspaper following the Australian court finding, a Viagogo spokesperson said the penalty decision covered a period of less than eight weeks.

Viagogo has overhauled its platform

“Since that time, we have overhauled our platform – a process that included consultation with consumer protection regulators in a number of countries.”

“We are carefully considering today’s decision and for that reason we cannot provide further comment at this time.”

According to UK law firm Bird & Bird LLP, Viagogo has also in the past been at loggerheads with the UK’s Competition and Markets Authority and in July 2019 the Authority brought contempt of court proceedings against Viagogo for failing to comply with a court order to change certain business practices.