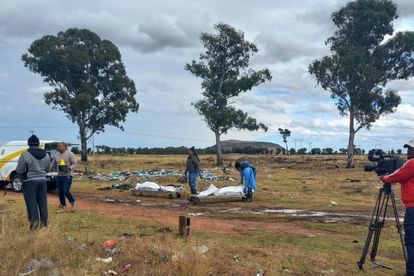 Three bodies full of bullets were found in a veld in Mangaung. Photo: SAPS/Facebook

Three bodies full of bullets were found in a veld in Mangaung. Photo: SAPS/Facebook

Three unknown men’s bodies were discovered in an open veld near the intersection of the N6 and R702 roads in Mangaung, in Free State on Saturday.

MANHUNT LAUNCHED FOR THE KILLERS OF THREE UNKNOWN MEN

A man going to the forest to chop wood, spotted the bodies. He then alerted the Kagisanong police.

“On arrival the members found three unknown African males lying close to each other in a pool of blood.

The two victims’ hands were still tied at the back with shoelaces and the third victim’s laces were already loose.”

Police forensic experts were called to the scene and a closer examination revealed that the three unknown men were shot several times on their heads, necks, and upper bodies.

The police have launched a hunt for suspects involved in the murder of the three.

Covane said the empty cartridges and motor vehicle tracks found at the scene, indicate that the victims might have been transported and their lives ended there.

Cases of murder were opened at Kagisanong police station.

Police have since urged members of the public who might have information that can help in the investigation of the case, and the arrest of the suspects, to contact Sergeant Mokete Godfrey Motsoai at 082 466 7255.

Alternatively, the information can be submitted on MySAPS App or the Crime Stop number 08600 10111.

Members of the public who submit information may opt to remain anonymous and any information received will be regarded at confidential.

Meanwhile, the Cape Town High Court this week handed down hefty sentences to Thando Manuel and his co-accused Nathan Erasmus.

Manuel was given two life sentences for the murders and an additional 65 years imprisonment for the other crimes.

Erasmus was given two life sentences for the murders as well as an additional 60 years imprisonment for the other charges.

According to a police spokesperson, Ndakhe Gwala, on 18 March 2018, the two went to a known drug outlet in Protea Street, Kleinvlei.

The suspects posed as customers.

“After a brief verbal engagement, they opened fire on three victims, two of whom died on the scene while one sustained a gunshot wound,”

The suspects fled on foot but Kleinvlei SAPS members, with the aid of the community arrested one of the suspects.

Through further investigations, the police managed to arrest the second suspect