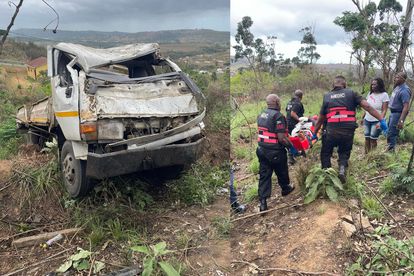 Three people were injured after a 4 ton truck collided head-on with a white Mazda Etude before plummeting down an embankment in Oakford, KwaZulu-Natal on Saturday, 15 October.

In a statement, members of Reaction Unit South Africa (RUSA) were dispatched to the scene at approximately 11:02 after receiving multiple calls from the public reporting the incident.

“On arrival, a white UD truck was located several meters down a steep embankment while an extensively damaged white Mazda Etude was located on the road.”

WHAT CAUSED THE VEHICLE TO ROLL DOWN AN EMBANKMENT

It is reported that the driver and passenger from the truck sustained severe injuries. They were stabilised on scene by Medics before being transported to hospital by ambulance. The driver of the light motor vehicle was transported privately to the hospital. The extent of her injuries could not be confirmed.

According to the driver of the truck, he was travelling downhill when a vehicle in front of him braked suddenly. He swerved into oncoming traffic when he collided with the Mazda Etude. The truck then veered off the road and plummeted down a steep embankment.

RUSA ATTENDS TO ANOTHER COLLISION ON SATURDAY

On the same morning, RUSA also attended to an injured driver who crashed into a bridge on the R102 Canelands, KZN.

“The driver of a black Volvo S60 was injured after his vehicle crashed into a bridge on the R102 in the vicinity of Canelands – KZN this morning (Saturday).
Members of Reaction Unit South Africa (RUSA) arrived on scene at approximately 00:43. The driver of the vehicle informed RUSA Members that he lost control when he avoided a vehicle that ignored a red robot. His car left the road and crashed into a bridge. The 46-year-old sustained moderate injuries and was transported to hospital by ambulance,” the company reported.