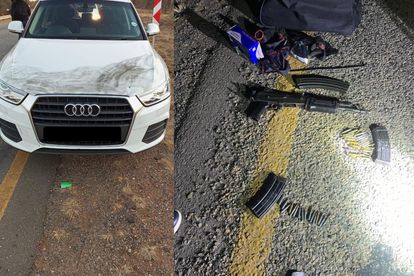 Three heavily armed suspects who were arrested at the Baobab Tollgate are expected to appear in the Musina Magistrate’s Court on Monday, 19 September.

Police spokesperson Lieutenant Colonel Malesela Ledwaba said the three heavily armed suspects were apprehended soon after committing a cross-pavement robbery at the N1 Business Centre in Musina in which a cash-in-transit security officer was shot and empty money bags robbed.

“The three were nabbed during a snap roadblock manned by the Beitbridge Task Team and Musina SAPS members next to the Baobab Tollgate on Thursday, 15 September,” he explained.

SUSPECTS SHOOT AT A SECURITY AMID ROBBERY

This after three heavily armed men allegedly accosted security officers collecting money from the businesses in the area.

According to Ledwaba, one of the guards was pointed with a firearm and ordered to lie down and the driver was shot and injured.

“The suspects took two empty money bags and fled the scene, driving a white Ford Ranger which they then set alight and abandoned at Blackkiesdorp.”

He added, “They then got into two high-performance getaway cars, a Mercedes Benz and an Audi and sped southwards along the N1 road. Members of the Task Team and the local police managed to intercept them”.

The Provincial Commissioner of Police in Limpopo, Lieutenant General Thembi Hadebe has commended the speedy reaction of the members involved that led to the apprehension of the suspects.
The suspects, aged between 45 and 54, will appear in Musina Magistrate’s Court facing charges of armed robbery, possession of illegal firearms and ammunition and possession of suspected stolen motor vehicles. He also mentioned that a charge of resisting arrest has also been added.