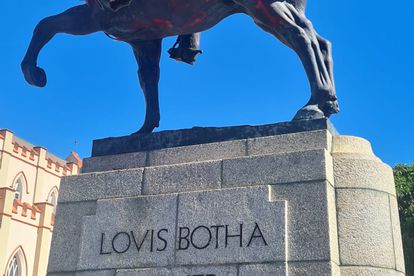 Three people, two men, and a woman had been arrested after the Louis Botha statue situated at the main entrance of Parliament were vandalised.

In videos shared on social media, EFF-supporting protesters can be seen high up the statue, repeatedly hitting it while chucking fallen debris to the floor. Other demonstrators cheer the vandals on as passers-by look on in horror.

Police spokesperson Colonel Athlenda Mathe said that at about 14:42 this afternoon, members of the SAPS spotted the trio in possession of a ladder, grinder, and generator near the statue.

A SCUFFLE BETWEEN THE THREE AND POLICE STARTED

She added that all three have been arrested and charged for malicious damage to property, resisting arrest, and the assault of police officers.

The three people, two men aged 28 and 39 as well as a 32-year-old woman, are expected in court soon.

Freedom Front Plus MP Heloise Denner said the EFF members’ vandalism of Gen. Louis Botha’s statue in front of Parliament on Wednesday is unacceptable and demonstrates a culture of lawlessness.

‘EFF MOVEMENT IS FOUNDED ON HATE – MAIN OBJECTIVE IS TO DESTROY’

She said the Economic Freedom Fighters (EFF) is a movement founded on hate, and its main objective is to destroy.

“They do not value heritage and diversity at all. It is no secret that this party despises the Afrikaner, its heritage, and its history.

“The ANC government’s attack, incited by the EFF, on the Afrikaner’s heritage landscape was seen in action on Wednesday,” Denner said.

‘DEPARTMENT AND EFF MUST BE HELD ACCOUNTABLE’

The Minister of Sport, Arts and Culture Nathi Mthethwa recently announced his department’s plans to, among other things, move so-called Apartheid statues to statue parks.

“What exactly is considered an Apartheid statue remains unclear, but in the process, the department and the ANC government have paved the way for disrespectful, rash, and vandalistic behaviour.

“Apparently, uninformed, radical outcasts are under the impression that they have the right and platform to commit such criminal acts of vandalism.”

Denner said the department is just as much to blame for these vandals’ actions as the EFF and its members, and it must be held accountable.

“Regardless of the origin of any statue, image, or memorial of historical value, it ought to be respected and conserved because it is part of South Africa’s history and heritage landscape.

“Just because an individual or party does not like, know, or respect a part of our history, it does not give them the right to destroy any statue or memorial that represents that part of history,” she concluded.