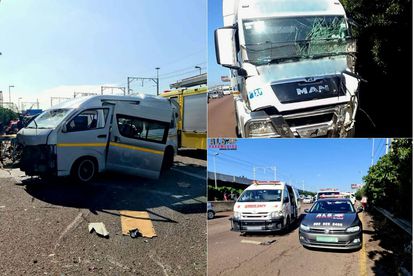 Three people have died in a multiple vehicle collision on the M4 Northbound before Victoria Embankment on the morning of Tuesday, 9 August. Photo: Supplied / ALS Paramedics

Three people have died in a multiple vehicle collision on the M4 Northbound before Victoria Embankment on the morning of Tuesday, 9 August. Photo: Supplied / ALS Paramedics

Three people have been killed and approximately 15 others injured in a multiple vehicle collision on the M4 Northbound before Victoria Embankment in KwaZulu-Natal (KZN).

A collision involving a taxi, truck and other vehicles occurred on 9 August

ALS Paramedics revealed that they received calls of a horrific multiple vehicle collision and arrived at the scene to find total carnage. A fully loaded taxi, truck and two to three vehicles crashed on the highway just before 9:30 on Tuesday, 9 August.

The taxi overturned numerous times ejecting most of its occupants.

“At this stage, I can confirm that three people had passed away. They are all believed to be adults in their early 20s and 30s,”

Paramedics stated there was nothing more they could do for the three who passed away and they were declared deceased on the scene.

They confirmed that around 15 people, including children, sustained various injuries ranging from moderate to critical. The injured patients are being stabilised at the scene by ambulance services and will be transported to nearby hospitals for further care.

The events leading up to the collision are currently unknown. ALS Paramedics confirmed that all SAPS are in attendance and will be investigating the matter further.

24 injured after truck crashes into a stationary taxi on N3, KZN

It was previously reported that twenty-four people were injured when a truck rear-ended a stationary taxi on the N3 outside Ladysmith in KwaZulu Natal (KZN). The incident reportedly happened on Saturday, 6 August, morning, ER24 paramedics and Provincial EMS attended the scene.

Paramedics reportedly found a large truck lying on its side across the slow and emergency lane while a taxi was a short distance away. Several people were found seated along the roadside.

According to ER24, medics assessed the patients and found that twenty-four people had sustained minor to moderate injuries. Fortunately, no serious injuries or fatalities were found. ER24 confirmed that the patients were treated, and four were provided with pain-relief medication before they were transported to nearby hospitals for further care. Read the full story here.