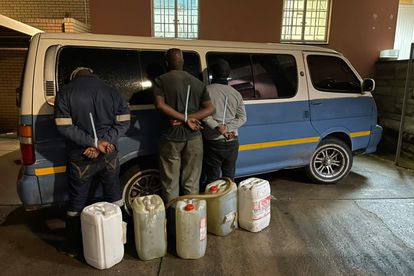 The suspects who were caught red-handed stealing diesel. Photo: Twitter/@SAPoliceService

The suspects who were caught red-handed stealing diesel. Photo: Twitter/@SAPoliceService

The three were drawing diesel from a truck that was parked on the side of the road as the driver went to declare goods loaded on his truck at customs.

Police spokesperson, Warrant Officer Mmako Mophiring said it is alleged that on 4 February 2022 at about 19:45 police were conducting Crime Combating Duties at Ficksburg and Meqheleng.

“While patrolling near Ficksburg Port of Entry, they noticed a truck on the side of the road and next to it was a blue Toyota taxi with Lesotho registration numbers.

“They decided to stop their vehicle and investigate. Three suspects were found busy draining diesel from the truck into 25 litres containers using a hose pipe. Upon further investigation they noticed that two 25 litre containers were already loaded in the taxi.”

Mophiring said the three suspects were immediately placed under arrest.

Just as the police were interviewing the suspects, the driver of the truck arrived and was surprised to see policemen near his truck. He told them he had left his truck and went on foot to declare the goods that were in the truck at the Port of Entry.

The tree suspects aged between 30 and 40 are expected to appear before the Ficksburg Magistrate court on Monday, 7 February 2022 facing charges of possession of suspected stolen property and theft of diesel.