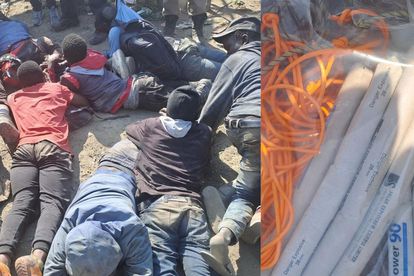 Thirteen-year-old among a string of illegal miners arrested in Benoni. Photo: SAPS/ Facebook.

Thirteen-year-old among a string of illegal miners arrested in Benoni. Photo: SAPS/ Facebook.

Thirteen-year-old was among illegal miners who were arrested with explosives following a disruptive operation today, Thursday, 1 September.

“Suspected illegal miners who are aged between 13 and 54 were found with explosives and other equipment used for illegal mining,” said Masondo.

He added that the police destroyed the structures used as workshops and hiding places by the illegal miners.

“The suspects will be charged under legislation related to illegal mining activities and illegal possession of explosives, among other crimes.”

HOME AFFAIRS TO BE ROPED IN TO CONDUCT CHECKS

He said they will be processed by the Department of Home Affairs as they are all suspected to be undocumented foreign nationals.

“The multidisciplinary operation started with the tracing of wanted suspects in the province. More than 1050 people who have been on the run after committing crime that includes gender-based violence were traced and arrested.”
“In the second phase of the operation, police conducted a roadblock in Benoni where two cars with engine numbers tampered with were impounded. Seven illegal liquor outlets regarded as generators of crime were closed down.
The disruption of illegal mining operations was the third phase of the operation and also took place in other Districts around Gauteng,“ Masondo explained the activities of the day.

The focus on illegal miners follows the brutal rape of eight girls who were a part group that was shooting a music video in a mine dump in Krugersdorp in July.
Following an outcry from the community, police raided the mine and arrested all the illegal miners to positively link those involved in the sexual crime.