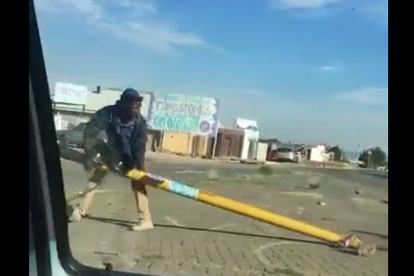 Criminals go for anything and everything it seems. Three were spotted stealing cables from a traffic light.

It is not clear when and where the incident happened but it is suspected to be in Johannesburg.

After successfully dismantling it, he leaves the light on what looks like a pavement. All three then walk off with the cables.

Recently, a video of a man who allegedly stole a traffic light and dragged it down the road went viral on social media.

This bizarre event was captured somewhere in Sandton.

While it was unclear what the man intended to do with the traffic light, some social media users assumed that it might be sold for scrap.

The maximum penalty that may be imposed on a conviction of this offence is a fine or imprisonment for a period of three years in the case of first offenders.

This comes as President Ramaphosa signed the Critical Infrastructure Protection Act in 2019, which repeals the apartheid-era National Key points Act and provides for public-private cooperation in identifying and protecting critical infrastructure.

CABLE THEFT ON THE RISE IN SA

Week in and week out if not everyday, police arrest suspected cable thieves. Some are caught in the act while others are caught with them.

Various cities in South Africa have been battling power outages due to cable theft. Other infrastructure has been affected as well.

Electricity shortages, the inability to treat sewage water, and serious environmental problems have been linked to the opportunists who are digging up the large cables, to sell them on for profit.

The Freedom Front Plus has called for individuals found guilty of cable theft to spend more time behind bars.

“Scrapyard dealers and second-hand goods dealers who are charged with being in possession of stolen infrastructure must receive a fine of at least R100 million. The only way to put an end to this type of crime is to enforce the maximum penalty on the perpetrators and send the message that it will not be tolerated.”