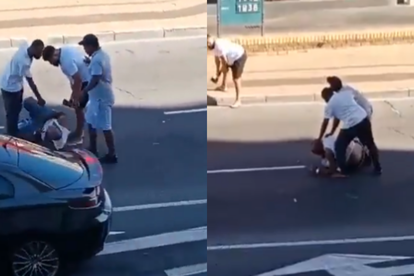 South Africans are clearly at their wits end with crime levels in the country and a recent incident involving an alleged handbag thief is a clear example of this sentiment.

A clip, shared online by Yusuf Abramjee on Wednesday afternoon, revealed how onlookers took matters into their own hands.

Ambramjee shared the disturbing footage of the assault that took place with the following caption:

In the clip one of the onlookers can be seen brandishing what appears to be an axe while another two can be viewed beating the alleged criminal.

The altercation is taking place on a busy road just in front of what appears to be a petrol station.

Vehicles can be seen trying to avoid the men while the beating continues, with other witnesses clearly opting out of intervening in the tense situation.

The man wielding the axe clearly wanted to use it on the suspect, but the other two men initially disencourage the decision. At a point one of the men dishing out the beating takes the axe, using the blunt end of the tool to continue the assault before his accomplice steps in to take it back.

The beating escalates with one man jumping on the suspected thief’s head, in plain view of countless vehicles in broad daylight.

In reaction to the footage, citizens had split opinions on the gruesome beating. While some supported criminals facing the wrath of the communities they prey upon, others felt that this kind of behaviour was simply unacceptable.

Tale a look at just a few reactions below:

“No place for vigilantism.”

“Almost felt sorry for him. But then I remembered all his victims.”