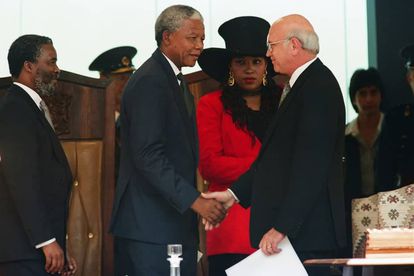 Nelson Mandela and FW de Klerk played a critical role in the making of the 1994 political transition in South Africa. (Reuters)

Nelson Mandela and FW de Klerk played a critical role in the making of the 1994 political transition in South Africa. (Reuters)

This was heard in the Western Cape High Court on Wednesday.

But Major-General Andre Lincoln, who confirmed he was indeed shot in the ankle outside a safe house in Higgovale, Cape Town, in 1997, denied he said anything about a third force.

He was instead arrested on an array of charges linked to Palazzolo. He was acquitted.

Allegations made against Lincoln by another investigator in the Mandela-appointed unit, Abraham Smith, were read out in court in on Wednesday. Smith claimed he saw Lincoln the day after the 1997 shooting.

“Director Lincoln said he thinks the shooting is third force-related and said: ‘These fucking boere would like to take me out,'” Smith wrote.

Lincoln testified on Wednesday that he would never have used such language.

The court heard that Smith suspected that Lincoln removed copies of arrest warrants of Italian fugitives from the unit’s office.

Lincoln denied this, saying the day he was arrested then fellow police officer Leonard Knipe, and another officer with the surname Rossouw, “removed whatever they could get their hands on” from the office.

Lincoln believes Knipe and Rossouw, acting on the orders of the then-national police commissioner George Fivaz, helped set up the “malicious” prosecution against him.

Knipe was in the court’s public gallery on Wednesday.

Lincoln earlier testified that Smith was among those in the police who targeted him.

“Smith broke the law. He exposed a covert operation that should never have been exposed.”