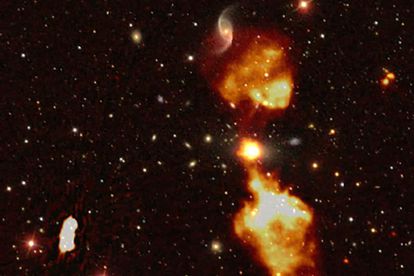 This handout released by Paris Observatory – PSL on February 19, 1919, shows an image taken with the Low-Frequency Array (LOFAR) radio telescope of a galaxy and its supermassive black hole ejecting jets of material, stacked on an optical image of the sky. IMAGE: Cyril Tasse/AFP/PSL

This handout released by Paris Observatory – PSL on February 19, 1919, shows an image taken with the Low-Frequency Array (LOFAR) radio telescope of a galaxy and its supermassive black hole ejecting jets of material, stacked on an optical image of the sky. IMAGE: Cyril Tasse/AFP/PSL

The government of the United Kingdom has committed £25 million to a project that seeks to establish a space observatory to look for exoplanets orbiting stars in the habitable zone.

The project is meant to intensify the search for planets that can either support life or show signs that they already support life.

The mission dubbed PLATO (Planetary Transits and Oscillations of Stars) will use 26 small telescopes and cameras to form a kind of compound eye similar to that of a fly, that will observe nearby stars in an attempt to isolate undiscovered planets by observing their shadows against the star.

The project will then use separate instruments to determine whether or not the planet is in the habitable zone of the star, the key being whether the planet can support water in a largely liquid state.

Researchers will then study the chemical composition of the planets for telltale clues of life such as the presence of methane gas.

UK Science Minister Chris Skidmore said this week: “Work to discover Earth-like planets around other stars may eventually lead to us answering the question of whether extra-terrestrial life exists.”

To date we have discovered over 3,000 planets beyond our Solar System but none contain the unique cocktail of conditions required to support life as we know it.

The dimming activity of nearby star EPIC 204376071 has marked it as one candidate for an exo-planet or alien megastructure to orbit. The light from the star, just 440 light-years from Earth, dimmed curiously recently sparking hopes that there was something to be found in the system.

Before we get too excited scientists have suggested that the fluctuations in light emitted by the star are consistent with it being orbited by a planet or brown dwarf encircled by rings similar to those of Saturn which can disrupt or distort light.

In a report published by the Telegraph Professor Don Pollacco of Warwick University, who head the PLATO Science Management Consortium was quoted as saying:

“These planets will be close enough to facilitate a historic search for signs of life in their atmospheres using the next generation of large telescopes.

“For the first time we will start to understand if life exists beyond the solar system.”

Britain’s space programme has also been handed a £7 million boosts to its efforts to study space weather phenomenon’s like solar wind.

The most intense recorded solar weather events occurred before the communications revolution that took place at the turn of the century and there are concerns that an intense solar flare could cripple global communications systems.

“Space weather – such as solar wind – is a potential threat to our communications systems here on Earth so this research examining how the wind interacts with our planet’s electromagnetic system.”