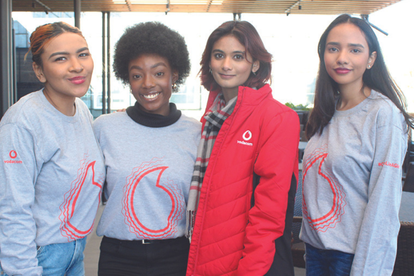 From left to right: Saabrerah Salie (19), Chimwemwe Mwansa (18), Zainaaz Hansa (18) and Shreya Rupan (19), all alumni who shared their journey with Vodacom. GCIS Vuk’uzenzele

From left to right: Saabrerah Salie (19), Chimwemwe Mwansa (18), Zainaaz Hansa (18) and Shreya Rupan (19), all alumni who shared their journey with Vodacom. GCIS Vuk’uzenzele

The programme was launched in 2017 in Tembisa, east of Johannesburg, with only 20 girls. Today, Vodacom seeks to train 1 500 young girls in coding this financial year, bringing the total number of girls trained to 4 000.

This year, Vodacom celebrates five years of this programme, which has expanded to Mozambique, Tanzania, Democratic Republic of Congo and Lesotho.

Speaking at the five-year celebration event, Njabulo Mashigo, Human Resources Director for Vodacom South Africa, said: “The gender disparity in STEM is alarming, especially since these are the jobs of the future. By teaching high school girls how to code, we’re opening their eyes to sequential thinking around problem-solving and stimulating creativity and design skills.”

Coding is the process of transforming ideas, solution, and instructions into the language that the computer can understand. Coding is how humans talk to computers to get the output they want.

Some alumni shared how #CodeLikeAGirl has positively influenced them and boosted their confidence.

Saabrerah Salie (19) coded an epilepsy detector. Chimwemwe Mwansa (18), Shreya Rupan (19) and Zainaaz Hansa (18) have each coded their own websites.

Hansa programmed past papers for all grades and all subjects. “I created an app for the same thing,” said Hansa.

The young ladies believe these coding programmes are important for the job market, especially as society moves towards the Fifth Industrial Revolution in which automation will continue at an accelerated pace.

Hansa added that the programme was important because it empowered young girls and made them financially independent, meaning they could live as they choose and leave abusive relationships.

All the girls agreed that women can play any role in the IT and engineering spaces and that anything a man could do; they could do, too.

The #CodeLikeAGirl programme takes place during the school holidays for two weeks.

If you are interested in applying for this programme, you must have an interest in STEM subjects and/or careers. The programme is open to girls between ages 14 and 18 years from both public and private schools. For more information visit https://www.vodacom.com/vodacom-foundation.php(link is external) or follow Vodacom on its social media handles for more information on the #CodeLikeAGirl programme.