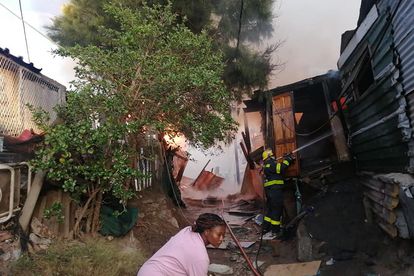 A man and a woman died in a Cape Town fire on Saturday morning, 4 June. Photo: Facebook / JP Smith.

A man and a woman died in a Cape Town fire on Saturday morning, 4 June. Photo: Facebook / JP Smith.

An early morning fire tore through an informal settlement in Diep River, Cape Town on Saturday. Approximately 40 firefighters from stations across the metro were sent to the scene.

A MAN AND A WOMAN DIED IN CAPE TOWN FIRE

City of Cape Town MayCo Member for Safety and Security Alderman JP Smith said the City’s Fire and Rescue Service received a call about a fire at The Gatjie informal settlement at approximately 7:26 on Saturday.

Around 40 firefighters from Constantia, Wynberg, Lakeside, Ottery, Mitchells Plain and Roeland Street were dispatched to the scene to tackle the blaze with three water jets and one fog jet.

“A total of 15 structures were destroyed and 64 persons displaced. Sadly an adult male and female perished in the flames,” said Smith.

Disaster Risk Management helped families at the scene and the Western Cape Government’s Human Settlements Department has been contacted to help with relief efforts.

“With the winter cold now settling in, many persons turn to open flame fires for warmth. With an increase of residential and informal settlement fires increasing at a rate of around 10% each year, we implore all residents to exercise extreme caution this winter. Never leave an open flame fire unattended and always ensure any fires are made away from surrounding materials that could easily ignite,” said Smith.