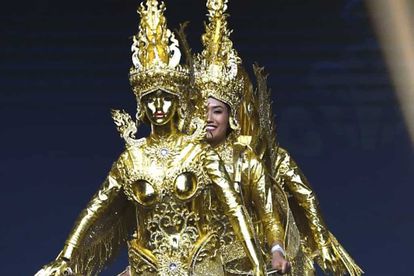 The majority of the contestants who strut their stuff in Monday’s Miss Universe National Costume Show aimed for an over the top look but for this piece I have chosen the five that I felt were just incredibly extra.

There is something incredibly entertaining about a super camp costume but these ladies took things up a notch.

An early favourite for the crown, Miss Phillipines Catriona Gray came out in an outfit designed to represent cultural elements from the three groups of islands that make up the Phillipines. It was the gigantic parol backpiece in honour of Luzon that stole the show. It was so big it had to be put on wheels, which could have done with some grease to prevent the awkward stumble Catriona endured at the top of the runway.

Miss Puerto Rico Kiara Ortega came out in an outfit that was both hugely symbolic and just huge. It symbolizes Puerto Rico rising up out of the ocean after the hurricane Maria disaster that crippled the island, and props to Kiara who was seen screwing this monstrous piece together backstage. The enormous helping hands symbolize those who helped Puerto Rico in their time of need and you can see from their sheer size that they don’t represent Donald Trump’s.

There were a lot of bird themed costumes on display at the show but Miss Indonesia took things up a notch with animatronic flapping birds attached to her back and an enormous bird of paradise headpiece to honour her national bird.

The selection of a Miss Laos entry into Miss World without a pageant being held raised some eyebrows earlier this year but On-anong Homsombath stopped the show with her outfit entitled stream of generosity. The outfit speaks for itself really, it is the veritable definition of extra.

105 pounds or about 47 kgs, that is what Miss India Nehal Chudasama’s national costume weighed all told. Nehal donned the costume of an Indian Warrior Pricess complete with a throne, which she carried on her back, of course.

While it is easy to make fun of someone for lugging something so massive onto the stage, I feel Nehal truly embodies the spirit of a warrior princess. Being bullied for dusky skin and losing her mother to cancer at 13, Nehalis a depression survivor who has turned her weakness into strength. Nehal pushed herself through a major body transformation more than a year ago and now works as a Fitness Consultant.

She also serves as an Ambassador for an Indian Sports Nutrition brand. Based in India’s commercial capital Mumbai, she also works as a EMCEE and model. Nehal aspires to be in Indian Police Services and serve the society. She volunteers for an NGO that helps children with cancer and has also conducted seminars to bring awareness to childhood cancer.

Be sure to check in for more on the ongoing Miss Universe pageant.