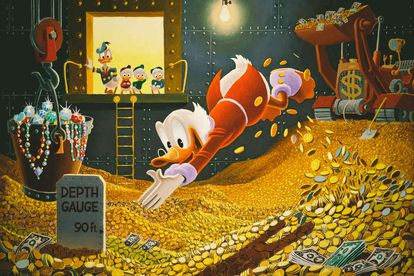 In a document that’s meant to act as foundation for next year’s National General Council (NGC), the party proposes more public funding aka more tax money funnelled towards Luthuli House.

A report by the Mail & Guardian shows that the document was tabled at last month’s National Executive Council (NEC) meeting of the ANC, by treasurer Zweli Mkhize. Remember when the party money dried up? Guess they aint ready to stop just yet.

This proposal is nothing new, as something similar was tabled at Mangaung in 2012, calling on the ANC to “explore mechanisms of expanding political party funding in order to promote and support democracy”. Seems they’re unclear as to the difference between corruption and democracy.

Apparently, the ANC is afraid of donor funding frying up and has bills coming out of their ears! Mkhize is under the impression that their sexy cars should be come the public’s responsibility. Perhaps he should take a trip to Langa and go door-to-door to ask for more cash, while his BMW is idling outside.

“Fundraising remains the most important source of revenue, but given the large amount of funds received from donors over the last 20 months, the risk of this source of funding dwindling due to donor fatigue is of concern,” said Mkhize. Anyone remember Ducktales? Now, while the ANC is far from Scrooge McDuck, we can imagine them diving into our money the way he dove into his own.

“Increased public funding will assist in strengthening democracy, eradicate the influence of private donors on political parties, build transparency and accountability of political party finances and ensure the financial sustainability of the ANC,” reads Mkhize’s doc.