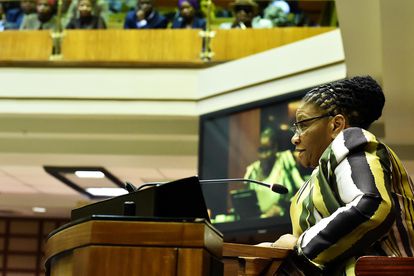 Less than two months since a hostage situation involving Defence Minister Thandi Modise, her department is yet to finalise the very grievances which led to those dramatic scenes. Modise says both her department and  the Presidential Task Team (PTT) on Military Veterans are still committed towards eventually finding a solution that all parties will be pleased with.

Modise responded to a written Parliamentary question from ANC MP Thabo Mmutle, who wanted an update on what the department has done in dealing with the challenges continuously faced by military veterans.

HERE’S A REMINDER: On 14 October, Modise, her deputy Thabang Makwetla and Minister in the Presidency Mondli Gungubele were held hostage by the disgruntled ex-combatants, whom they had been meeting to iron out their grievances. The group was initially scheduled to meet with Deputy President David Mabuza, however this seemingly did not happen – something which they were quite unhappy about. The military veterans have a series of demands from government, chief among them is a once-off R4 million payment, for their contribution to the fight against apartheid.

In her written Parliamentary reply to Mmutle, Thandi Modise says they have been holding discussions with the military veterans since as early as November 2020 – more than a year prior to the hostage drama. She says the veterans are seeking amendments to the Military Veterans Act.

That’s not all: Other matters that needed to attended to include social relief as well as the immediate payment of the COVID-19 unemployment top-up grant. Modise says she wrote to the Department of Social Development regarding 20 000 food parcels for the military veterans.

“The payment of the R850 top-up grant continues for the approved beneficiaries of the Sassa R350 beneficiaries. The grant was first approved to be provided for a period of six months, but was subsequently extended for a further three months in the 2020/21 financial year,” Modise said.

In February 2021, President Cyril Ramaphosa approved another three months’ extension of the R350 grant. Modise says this meant that each military veteran who met the criteria would receive the benefit for 12 months, which amounts to a total of R10 200 each.