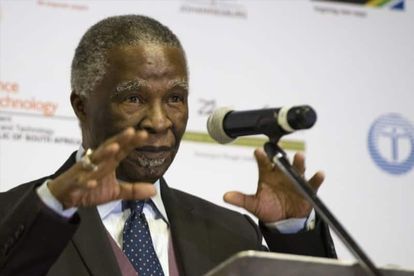 Former President Thabo Mbeki cautioned South Africans against buying into the false notion that blames foreigners for the majority of crimes in South Africa. He was addressing students and diplomats at the University of South Africa (UNISA) in Tshwane on Wednesday, 22 September.

MBEKI SAYS FOREIGNERS AREN’T TO BLAME FOR BULK OF CRIME

According to SABC News, Mbeki said many South Africans commit crimes. Nevertheless, suspects should be arrested regardless of their nationality.

“We need to walk away from the false notion that the bulk of crime in this country is caused by foreigners. It is not correct.

“The bulk of crime in this country is caused is committed by South Africans. There are foreigners who commit crimes. You should arrest them and charge them this is what we should do and avoid labelling other people,” said the former president.

Earlier this month, the Minister of Police, Bheki Cele, made similar comments at the South African Local Government Association’s (SALGA) Council of Mayors’ conference in East London on Thursday, 8 September.

Cele said 18 000 out of 544 000 inmates in South African prisons are immigrants. “Foreign nationals are not a problem. It’s South Africans. They are in prison in large numbers, which means they do things they are not supposed to do,” said the police minister.

READ: Cele says only 18 000 people in SA prisons are foreign

The SABC reported that the Minister of Defence, Thandi Modise, said foreigners run most of the criminal syndicates in the country. This happened in February 2022 and the Minister was speaking during a Justice, Crime and Security Cluster (JCPS) briefing after the State of the Nation Address (SONA).

READ: Thandi Modise says most crime in SA is committed by foreign nationals

Modise’s comments came in response to the deadly Rossettenville shooting incident in south Johannesburg where a 25-man gang, which included suspects from Zimbabwe and Botswana, got into a massive shootout with police.

Eight suspects were killed in the shootout and a dozen were arrested. The gang was allegedly planning to pull off a cash-in-transit heist.

Modise said the government does not have the courage to call out foreign criminals out of fear of being labelled xenophobic.

South Africa is becoming an increasingly hostile place for foreigners with groups like Operation Dudula and certain political parties tapping into and stoking anti-migrant sentiment across the country.