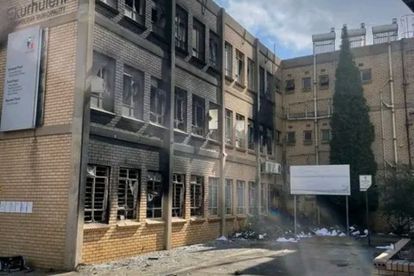 Residents of Tembisa are left with the aftermath of their protests on Monday which left them without power. PHOTO: Twitter/@mbuso_siera

Residents of Tembisa are left with the aftermath of their protests on Monday which left them without power. PHOTO: Twitter/@mbuso_siera

While it remained calm in Tembisa on Tuesday afternoon, the area is without power due to the burning of a substation.

In addition, Eskom has also suspended power supply in the area until protests come to an end.

RESIDENTS DEALING WITH AFTERMATH OF PROTESTS

Residents are dealing with the aftermath of the protests, as the City of Ekurhuleni tries to clean up the area.

Municipal cars were still on fire on Tuesday morning, but the area is now without power. This despite the protests was sparked by high utility rates and electricity bills.

“We have withdrawn services in Tembisa due to the ongoing protests. Services will only resume when it is safe for our employees to work in the area,” said Eskom.

Not only has Eskom withdrawn, but the burning of a substation on Monday has left some areas without power.

The affected areas include parts of Tembisa 1, Clayville, Olifantsfontein, Winnie Mandela and Birch Acres Extensions 23 and 25.

But the City of Ekurhuleni says that they could not be able to repair the damage as the situation in the township remains volatile.

“While the City is aware of the current situation regarding the power in the area, unfortunately, our technicians are unable to attend to the problem as the situation in the township remains volatile – thus putting their lives at risk.”

Four people have been killed during the protests, with one allegedly being shot at close range by the Ekurhuleni Metro Police Department (EPMD).

The Independent Police Investigative Directorate (IPID) said they would be investigating the alleged shooting.

But two of the deceased were discovered on Monday night, allegedly after bombing an ATM.

EMPD spokesperson Kelebogile Thepa confirmed that the killing allegedly by one of her colleagues is under South African Police Service (SAPS) investigation.

“We can confirm the death toll has risen to four as the last two of the incidents did not involve the EPMD… let us allow the investigations to continue as SAPS will give comment.”

The last two bodies were discovered around the burned municipal office, she said.

“The same allegations were brought to our attention that they were bombing an ATM. One of the fatalities was near the municipal office. It’s unfortunate that such acts where people are not complaining of service delivery died of criminal activity,” she told the SABC on Tuesday.

Meanwhile, the mayor of Ekurhuleni, Tania Campbell has promised to meet with residents on Friday to engage on their issues.